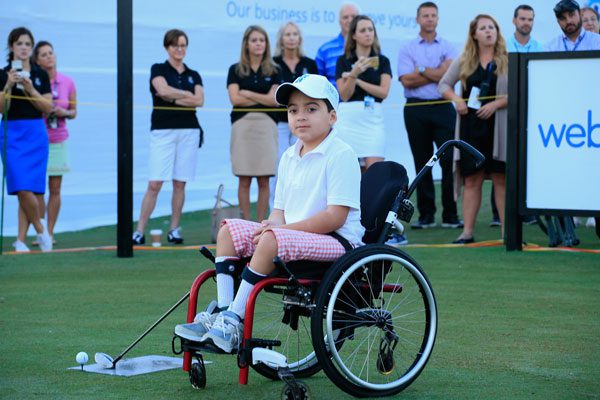 Nothing Keeps this Inspirational Boy Off the Golf Course

The 2020-21 PGA Tour Champions Super Season was undoubtedly one for the record books. In a season filled to the brim with highs, not many would argue against Bernhard Langer’s unprecedented sixth Charles Schwab Cup being the seminal moment. Phil Mickelson playing six times and claiming four victories was huge for the profile of the tour, and both he and Jim Furyk will hope to be in contention this year for the Schwab Cup.

Steven Alker and David Duval make up the top five list of players most likely worth keeping a close eye on in the chase for the 2022 PGA Tour of Champions Schwab Cup.

The question is simple: Can Bernhard Langer still compete at this level in the same year that he reaches his milestone 65th birthday? The German has no problems answering that question in all the previous years he has been swinging a stick, and he now has more top-ten finishes, more victories, and more Schwab Cup titles than anyone on tour. Is he in a position of health to continue winning, however? It is unlikely he will play most weeks this season as he did in the 2020-12 Super Season, but it’s impossible not to think he will give this push for a seventh Schwab Cup everything he has. Langer, after all, in typical German style, loves nothing more than proving his doubters wrong.

Mickelson started six times and finished 12th on the Schwab Cup points list. The question on everyone’s lips is, how much will he play? He has made it clear on several occasions that he loves playing with and against the golfers that he grew up idolizing, but the pull of competing at the highest level against the worlds best young players is what still motivates him the most.

If Phil was to double his appearances from six to twelve, then you have to think he would be playing enough golf to put himself in contention to win the Schwab Cup.

When Alker celebrated his half-century birthday early last season, many wondered if he would become the man the rest would chase, and in ten starts, he had nine top-ten finishes alongside his one victory. He also finished runner-up to Phil Mickelson at the end of year Schwab Cup Championship.

Alker finished in 18th place on the Schwab Cup points list from only ten starts. He will be around on this tour for many years to come, and he will be highly competitive. In 31 rounds in 2021 on the PGA Tour Champions, Alker finished under par 27 times.

Jim Furyk had the Schwab Cup very much in his sights heading into the back nine on the final day of the 2020-21 season. On the 10th and the 13th, Bogeys ultimately cost him, and he finished behind Langer in 2nd place on the Schwab Cup points list. Despite falling marginally short, Furyk had a great first season on the Champions Tour, banking three wins and 18 top 10s in 26 starts. It is more likely than not that Furyk will win the Schwab Cup at some point in the coming years. He will be a full-time player on the Champions Tour, and his incredible work ethic and world-class game will no doubt see him get his hands on plenty of trophies in the coming years.

Duval will be making his debut at the Mitsubishi Electric Championship at Hualalai. He hasn’t played regularly on the PGA Tour since 2014, so questions are lingering about just how good his game is and if he will be able to reach the levels necessary to compete against the best over 50s. Let’s not forget, though, David Duval is a former world number one and a 13-time winner on the PGA Tour, so he makes the list of top five. There is a lot of excitement as we wait to see how his game fares.

See also: The PGA Tour is Coming to Netflix