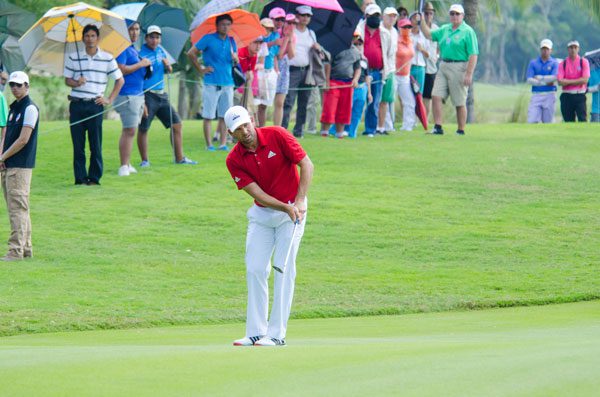 At the 2017 U.S. Open, Justin Thomas was, for the first time, threatening to win a major championship. The 24-year-old hit off in the last group on Sunday, having turned in a U.S. Open record round of 63 the day before. He stumbled, though, shooting a 75 to finish the tournament in a tie for 9th place. These experiences are part and parcel of the life of a young golfer, and they often prove to be the catalyst for later success. This certainly proved true with Thomas.

Two months later, he stood at the 18th tee at Quail Hollow on day four of the PGA Championship having earned himself a 2-stroke lead. A maiden major victory was his, barring a significant slip up, and despite putting his drive into a fairway pot, he managed to sneak away with a harmless 5, securing his title in the process. Such victories are regularly accompanied by tales of significant hardship, at least in golfing terms—tales of missed cuts, sacked caddies and catastrophic fourth rounds. 2017 U.S. Open aside, however, Justin Thomas’ journey has been relatively smooth sailing.

For many years, he has been touted as a potential major contender. He demonstrated great talent as an amateur, turned professional in 2013, and won his first PGA TOUR card for the 2015 season. He didn’t take long to showcase his ability on TOUR, breaking through for his first professional victory at the 2015 CIMB Classic in November.

The last 10 months, however, is where Thomas has shown what he’s truly capable of. He defended his CIMB Classic in October 2016, then won again at the SBS Tournament of Champions in January 2017. The next week, his hot streak became a memorable one. He claimed yet another victory, this time at the Sony Open in Hawaii, but more impressive than the victory itself was how it was achieved. He opened the tournament with an 11-under par 59, and followed up with rounds of 64, 65 and 65, setting numerous records along the way. He became the youngest player to shoot under 60, and broke both tournament and PGA records for scoring on his way to a 7-shot victory.

Unsurprisingly, Thomas was born into golf. Born in Louisville, Kentucky, his father had been the head professional at Harmony Landing Country Club since before Thomas was even a thought. Before that, his father’s father was also a head professional, at Zanesville Country Club in Ohio. He even managed to make an appearance in the U.S. Open one year.

Talented parents don’t necessarily equate to talented children, but in this case they certainly did. Thomas was hitting balls from a young age, absorbing the wisdom his father had acquired from decades of experience in the sport. He showed not only an interest in golf, but an aptitude for it, and a hole in one on Harmony Landing’s 16th at the tender age of 6 was testament to this. Adding an element of romanticism to this feat was the fact that Thomas’ father and his grandfather had also previously achieved it on the very same hole. Thomas played in his first PGA TOUR event at just 16 years of age, opening with a 65, and becoming the youngest player in history to make a cut at a PGA event.

With another recent victory at the 2017 Dell Technologies Championship, Justin Thomas has made it five PGA TOUR victories for the year—and it’s only September. He has moved into fourth place on the Official World Golf Rankings, and is first in the PGA Player of the Year Award. He is now only the fourth player in almost 60 years to win five tournaments—including a major—in a single year before the age of 25. The other three players? Jack Nicklaus, Tiger Woods and Jordan Spieth. Not bad company.