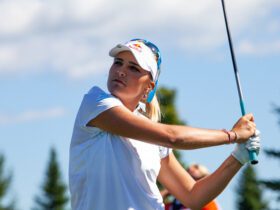 It’s fair to say that 32-year-old Texan Patrick Reed divides opinions. Though he enjoys success after success on the golf course, he attracts equal amounts of love and hate – many see him as a bit of a pantomime villain, and it seems he doesn’t collect many devotees along the way.

It’s certainly true that Patrick Reed is a prickly character to say the least. In 2014, he shocked many professional golfers by proclaiming to be a top-five player, despite having never actually competed in a major golf competition!

His decision to join LIV Golf and the reaction from the PGA only added to the controversial nature of Patrick Reed’s character.

So, has his innate confidence been misconstrued as arrogance, or is he the egocentric boor that some people believe he is?

He undoubtedly has a history of rubbing people the wrong way and is far from friendly, shushing crowds as he attempts putts and eschewing spectators totally.

It’s a shame that a man who donned the green jacket in 2018 when he won the Masters, is not recognised and revered like other champions because of his comments and approach.

So he’s a contentious character among spectators, but why is Patrick Reed held in such contempt by some of his peers?

There have been countless charges levelled against Reed, some dating back to his college days, most of which centre on breaching the rules throughout qualifying rounds and stealing goods from teammates’ lockers, both of which the golfer vehemently denies.

Then, at the 2019 Hero World Challenge, the American allegedly improved his lay twice by moving sand behind his ball, for which he was penalised two shots.

Officials from the PGA Tour maintained he acted “like a gentleman,” but everyone did not agree.

When asked if Reed cheated, Brooks Koepka, PGA champion, was inclined to say yes. “Yeah. “I believe, sure, yeah,” he said of his golfing partner. “I mean, I’m not sure what he was doing, constructing sandcastles? You are familiar with the location of your club. I mean, I took three months off but I swear I know when I touch sand.”

After the United States were defeated by Europe in the Ryder Cup, Reed yet again elevated himself above others, oblivious to what others thought.

In an interview with the New York Times, he questioned why he was separated from Jordan Spieth and why he didn’t play in every match.

“Obviously, the issue is Jordan not looking to play with me,” he insisted. “I don’t believe it’s smart to sit me twice for someone as successful in the Ryder Cup as I am.”

It came across as accusatory and curt, giving others reason to dislike him. Reed frequently practises alone, with his brother-in-law serving as caddy after his wife became pregnant with the couple’s first child in 2014. According to reliable sources, Reed’s connection with other family members is “complex.”

Reeds sister Hannah hasn’t spoken to him for years and his mother and father were absent from his wedding in 2012.

Not Everyone Hates Patrick Reed

Aside from his wife and her brother, he does have other supporters, including none other than Rory McIlroy.

“I admire him. I have a lot of respect for his game, his mental toughness, and his determination,” McIlroy said of Reed. “I’ve spent enough time with Patrick to know that he’s a truly nice guy who is often misunderstood. I really like him.”

In one memorable Ryder Cup match, the Irishman faced Reed and, after shooting a birdie on the eighth, raised his arms and yelled to the crowd, “I can’t hear you!” Reed then rolled a 25-foot birdie to halve the hole before sarcastically waving his finger at McIlroy, forcing the two to fist-bump.

Reed’s swing advisor and former college coach, Josh Gregory, agrees with the misleading label. “He’s said things he wishes he hadn’t said, but for the most part, he’s really misunderstood,” Gregory remarked. “He’s a lot more popular than people realise. He mostly sticks to himself, cares about his family, and plays golf, and that’s about it. He doesn’t have many other hobbies.”

He also emphasised his tireless work ethic. “A documentary about how hard this young man works could be made,” he added. “Yes, he’s really gifted, but there’s no secret to his success.” That describes his work ethic.

“No one can outwork or out-prepare him. Of course, he’s brash and boastful on the inside, but that’s not who he is on the outside. It may appear that way at times when he says, ‘I’m one of the best five players in the world,’ but he truly believes it.”

Reed does practise to the point of obsession. He always has, even when he was a youngster and used to go down to the course.

Is it truly just a case of him being misunderstood? He gets booed and jeered at times, but it appears he is more of a pantomime villain than an actual baddy.

Is he conceited and pretentious because he is so motivated to be the best, that he doesn’t care what others think of him?

His career continues to have bumps. With LIV Golf gearing up for its fourth event at the start of next month, and its players unable to compete on the PGA Tour, some are on a break, while others have elected to make an appearance on the Asian Tour – Patrick Reed being one of them. It was perhaps not the result he was hoping for, as he finished down the field behind Nitithorn Thippong at the International Series Singapore – but his closing round was the best of the week, a 67, and it included a hole in one on the 14th hole.

“A lot of ups, and a lot of downs today,” Reed said. “It was weird, it was one of those days when I did not hit the ball well. I decided to leave the pin out of the hole on the third, because I don’t like to have the pin in when I putt, and I go ahead and hole the putt and I think okay. Had a shorty on 13 which I missed, then I go ahead and make a hole in one on 14. So, it was just one of those days.”

Reed will be in action again next week at the International Series Korea, so it will be interesting to see whether he makes any new friends.

See also: When is it Okay to Take a Mulligan?