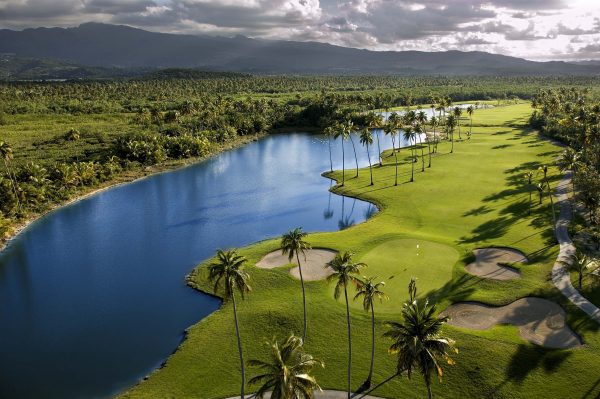 A key source for Shakespeare’s The Tempest, Bermuda’s natural island beauty has more recently enticed golfers, with several manmade attractions in the shape of great golf courses. A Ted Robinson course is at The Turtle Hill Golf Club at Fairmont, Southampton, a winner of Golf Digest’s “Best Places to Play Golf.”

Ted Robinson was a designer whose legacy will continue to be enjoyed by golf vacationers for many years to come. He designed over 160 course courses during his career—mostly on the mainland West Coast, but also in Mexico, Japan, South Korea, Indonesia, as well as Bermuda.

Robinson was one of the earliest advocates of the water feature as a significant golf course hazard. He liked to incorporate large green-side water features in his designs—which led to him to be nicknamed “King of Waterscapes.”

The Turtle Hill Golf Course features 18 challenging par 3 holes—and if you expect stunning views of the Atlantic Ocean from almost any point on this glorious island, you won’t be disappointed. Strong coastal winds add to the challenges of this par 54, 2,684-yard course. As you would also expect from Ted Robinson, there’s his signature water hazard at Hole 3, which plays over water. And those who know it well will advise you sagely, “It plays longer than it looks, and it’s better to be long and left than short or right.”

If you’re planning a luxury golf vacation, Fairmont Hotels & Resorts certainly know how to provide just that—bearing in mind not only the two luxury resorts on Bermuda at Southampton and the Hamilton Princess & Beach Club, but also that the group owns The Plaza in New York, The Savoy in London, and the Fairmont Palace Hotel in Shanghai, to name just a few.

Bermuda’s other firm favorite is the Port Royal Golf Course, Southampton, a Robert Trent Jones design that’s ranked among the world’s best public courses. The 18 championship holes over 6,842 yards, offer you the longest and perhaps the most picturesque course on Bermuda. The legendary 16th hole (235 yards, par 3) has confounded even the world’s best golfers, and it was a favorite of Jack Nicklaus. Of the 16th, the official “Course Tour” warns, “this hole has the ability to fool the strongest of minds.” The course has also played host to the PGA Grand Slam seven years running.