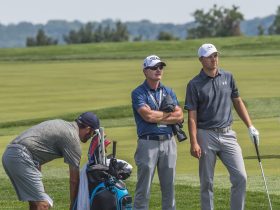 After a moving speech by his 14-year-old daughter Sam, Tiger Woods choked back tears as he was inducted into the World Golf Hall of Fame.

Sam spoke about not knowing if her father would emerge from last year’s horrific car crash, and Tiger Woods recalled battling racism as a junior player, speaking emotionally of the support of his parents, coaches and friends.

The 46-year-old said:”I didn’t get here alone – I had unbelievable parents, mentors and friends who supported me in the darkest of times and celebrated the highest of times.

“It’s actually a team award. All of you allowed me to get here and I just want to say thank you from the bottom of my heart.”

It’s currently unclear whether Tiger Woods will be able to return to professional golf after his car accident in February 2021. His health has clearly been affected, and he moved slowly on stage at the World Golf Hall of Fame event – but he is still an enormously significant figure in the golf world, and recently won the PGA TOUR’s Player Impact Programme, worth $8m, for generating more media interest than any other golfer in 2021 – this despite him having played only one exhibition tournament that year. His last official PGA TOUR event was the 2020 Masters – but last November, a Twitter post of him hitting golf balls under the title “making progress” attracted 7.8 million views.

See also: The Illustrious History of the Open Championship

In an outstanding career, Tiger Woods has won 15 majors, second only to the record 18 set by Jack Nicklaus, and he holds a joint record 82 wins on the PGA TOUR with Sam Snead. His achievements include spending a record 683 weeks as world number one. In 1997 he became the first black player to win a major with his 12-shot victory at the Masters, and between 1999-2002 he won seven out of 11 events, including a run of four across two years, often called the ‘Tiger Slam’. He is also known for his work with his TGR Foundation, set up in 1996 to improve child health, education and welfare.

In a recorded video message, Jack Nicklaus paid tribute to Tiger Woods by saying “I first saw him when has about 13. I watched this skinny kid hit a few balls and I was told he’d be good. I said we’d see about that. We’ve now seen.”

The lows of Tiger Woods’ career include reports of numerous affairs and the breakdown of his marriage to Elin Nordegren, as well as health issues with his back and knees.