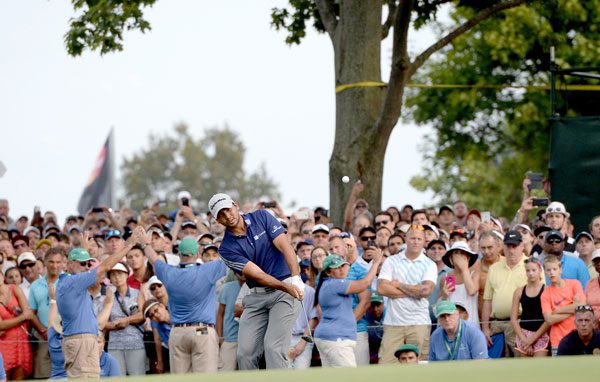 How the FedExCup Playoffs Work

During Saturday’s third round at the Houston Open, the tees were moved forward 75 yards from Friday’s play on the 17th at Memorial Park, a 301 yard par-4. And some real fun ensued.

“That’s why we like it when they move it up and make them short, drivable par-4s, because a lot happens, not always good,” the Golf Channel broadcaster Curt Byrum said.

His broadcast colleague Trevor Immelman added, “You look at the way it’s played — 3.8 (average strokes) enticing these players to take it on. It’s a great hole.”

Stephan Jaeger got away with an eagle two, having gone tee to green in a single shot, then rolling a stunning 22-footer.

To say Matthew Wolff and Kevin Tway didn’t enjoy the hole nearly as much as Jaeger did, however, would be an understatement of epic proportions.

Jaeger was one of only a few players tempted to take on the green and shoot for it over the water from the tee. Most players drove it left of the green as they looked on from the tee at the dogleg wrapping itself around the water to the right.

Tway hit a driver out left then chipped his second shot straight into the water. Wolff hit a pitching wedge off the tee landing it short of trouble, only to get into trouble hitting his second consecutive wedge shot short.

“Oh boy, oh boy,” Immelman said on commentary as Tway’s ball rolled further from the hole and towards the water. “And there you go,” he said when it dropped in for a swim.

Tway had been leading at the time, but the bogey five on the 17th and a second consecutive bogey on the 18th mean he starts Sunday one shot off the lead.

Three groups ahead of Tway and also leading the tournament when he reached the 17th, Wolff pulled a pitching wedge from his bag and opted to drop his tee shot early of the dogleg. A wise way to approach the hole but also a little disappointing. Wolff is one of golf’s longest hitters and on a risk-reward tee shot. It is always exciting to see players have a go.

“Wind dying down, driver might be a good club for Wolff,” Byrum said before the wedge came out of the bag. “It’s downwind, 296 to the front, 301 to the hole. That hole location is in the front, just over the lake that fronts this green. So it’s going to be really interesting to see what Matt Wolff does. Got to be so tempting for him to just try to send a driver straight up in the air.”

“Yeah, it must be,” Immelman said. “Particularly with as high as what he can hit it. He’s one of the few players that can land it on and keep it on. And for insurance, if he decides to go for it, because of the build-out over the back of the green there, he’ll be able to know that he can stop the ball if it comes out hot too.”

“Man, I wanted to see him hit the driver,” Byrum said after he hit a 170-yard wedge shot instead of swinging the club that we all hoped he would have, the club that would have taken it twice the distance.

“I always think back to a lesson Jack Nicklaus gave me,” Immelman said. “He said he always felt strategy-wise that he needed to know in his mind that he would pull a shot off eight out of 10 times if he was going to go for it. If he didn’t feel like he had that kind of confidence, he would play back to something he knew he could pull off.”

It was then that Wolff played his second shot, the wedge again. Yes – he really had opted to play wedge-wedge on a par-4. He dropped it short, however, well short at that. As it fell into the water, Wolff looked down at the bottom of his club to confirm he had hit the right one.

He took his drop, pitched on and two-putted for a double-bogey six, his lead in the tournament gone.

“Bet he wishes he had hit driver now,” Byrum said.

Did Wolff wish he had hit his driver? He was asked after his round why he chose to play the hole the way he did.

“I just didn’t really see the point in going for it, to be honest, Marc (Leishman, who Wolf was playing with)] hit after me, but with where that pin was and that back slope, if you were anywhere past pin high, it was going to be a really hard chip. As you saw Marc, he felt like he hit a pretty good chip, and it went 20, 25 feet behind the hole.

“On top of that, you bring in the water if you’re trying to stay short of it, so I just didn’t really see a point of going for it, and on top of that, I hit pitching wedge off the tee, which I almost felt a little — I almost feel like I wouldn’t let myself hit pitching wedge on a par-4, and I knew it was the right club, and I hit a sand wedge in. I knew I was going to be able to hit the fairway with a wedge, and I would have another wedge in. Not many times I thought I would be making double with two wedges, but it is what it is, and I have to live with whatever happened, but I just didn’t really see a point in going for it.”