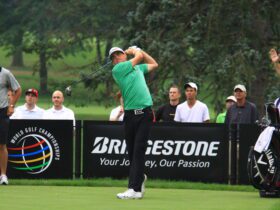 McIlroy, 33, fought back against American Scottie Scheffler’s six-shot lead, finishing one ahead of Scheffler and of South Korean Sungjae Im. Rory McIlroy’s four-under 66 just beat the world number one who finished on 21 under.

The East Lake victory was McIlroy’s fifth of the season, and he received $18m in prize money. “What a week, what a day,” McIlroy sai to Sky Sports. “I feel like Scottie deserves at least half of this. He’s a hell of a competitor. It was an honour to battle with him.”

Players started the season-ending event on staggered scores determined by their respective positions in the FedEx Cup standings. Scottie Scheffler started with a six-shot advantage over McIlroy, but after suspension of play during Saturday’s third round because of lightning, his lead was cut to one when play resumed on Sunday morning, though by the time of the final round he had stretched it again to six.

Both players bogeyed the first hole of their final rounds, but Scheffler dropped shots on the fourth and sixth, while McIlroy birdied the third and gained three more shots in succession from the fifth. By the time the match came to the final hole, McIlroy was leading by one, and though neither player followed up well after opening drives, Scheffler failed to capitalise on McIlroy’s hesitance.

McIlroy, who has now earned a total of $43m from his three FedEx Cup victories. said: “I didn’t really give myself much of a chance teeing off today. I thought six behind was going to be really tough to make up, but my good play and Scottie’s not-so-great play meant it was a ball game going into the back nine.”

After the results McIlroy commented on the future of the PGA TOUR: “I believe in the game of golf, I believe in this tour in particular, I believe in the players on this tour. It’s the greatest place in the world to play golf, bar none, and I’ve played all over the world. This is an incredibly proud moment for me, but it should also be an incredibly proud moment for the PGA Tour. They have had some hard times this year, but we are getting through it and that was a spectacle out there today.

“Two of the best players in the world going head-to-head for the biggest prize on the PGA Tour, and I hope everyone at home enjoyed that.”

McIlroy’s next match will be the DP World Tour’s PGA Championship on the West Course at Wentworth. Here he will come face to face with some of the LIV rebels who, for the time being at least, are still permitted to play on what was formerly the European Tour.