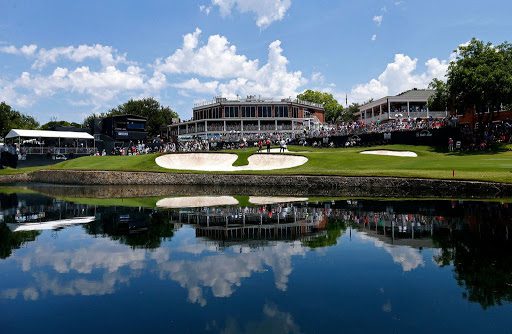 Tiger Woods has confirmed that he will return to Genesis Invitational this year, reprising his role from last year as a non-playing tournament host. The tournament at Riviera Country Club coincides with the first anniversary of the crash which resulted in Tiger requiring multiple surgeries to save his broken leg, not to mention the extensive rehab that followed.

Tiger shocked the world when he returned to semi-competitive golf at the PNC Championship in December and nearly won the two-day, two-player scramble playing alongside his son Charlie. Woods rode a golf cart for most of the week and often skipped hitting tee shots allowing him to downplay his readiness, but despite that, his crisp golf showing did nothing but fuel speculation regarding his PGA Tour return.

Many including close friend Matt Kuchar speculated that aspects of Tiger’s game are tour-ready, but Woods was quick to play that down when asked, saying: “No, no, no, no, I totally disagree. I’m not at that level. I can’t compete against these guys right now, no. It’s going to take a lot of work to get to where I feel like I can compete at these guys and be at a high level.”

The most optimistic of Woods’ supporters were hopeful of return at the Genisis as a competitor, a tournament for which Woods serves as Tournament host, and the TGR Foundation is the primary charitable beneficiary.

Woods has been quiet since the conclusion of the PNC in December. He has rarely been seen or heard from other than an Instagram post for Popstroke, a golf-and-entertainment company that he has a stake in, and also when he announced in January that Aaron Beverly would be this year’s recipient of the Charlie Sifford Memorial Exemption. This award represents “the advancement of diversity in the game of golf.” Beverly graduated in 2017 from Sacramento State and is this year making his PGA Tour debut.

Despite not participating this week, Wood’s attendance at the event is a sign that many fans are excited about. It’s encouraging to see he is comfortable returning to the public eye. Fans will be hopeful Woods joins CBS’s final-round coverage on Sunday like he has done here in previous years.

Despite the high-profile host of the Genesis not being ready to himself participate, the field is a solid one, with seven former world number-ones all hoping to be lifting the trophy on Sunday afternoon: Adam Scott, Brooks Koepka, Duston Johnson, Jason Day, Justin Thomas, Rory McIlroy and Jordan Spieth.
The media and golf fans all over the globe will be looking forward to hearing from Woods in the coming days, and we may learn more about when he intends to return to competitive play. The last we heard, Woods said he was interested in returning and playing a limited schedule moving forward, due to his health limitations following his accident.

“I don’t foresee this leg ever being what it used to be; hence I’ll never have the back what it used to be, and the clock’s ticking,” Woods said at the Hero in December. “I’m getting older; I’m not getting any younger. All that combined means that a full schedule and a full practice schedule and the recovery that it would take to do that. No, I don’t have any desire to do that. But to ramp up for a few events a year as Mr Hogan did, he did a pretty good job of it, and there’s no reason that I can’t do that and feel ready.”

Most golfing fans expect those few events to include The Masters and The Open Championship.

The Masters in early April is the greatest stage in golf; it is the setting for Woods most celebrated victories and where he has chosen to make several of his previous comebacks. Woods thrives in a controlled environment, and Augusta National is as controlled as any. The Georgia warmth at that time of year should present a pleasant climate to get his body ready to play, and don’t forget that it is a course he knows as well as any golfer could know a course.

The Open Championship isn’t until mid-July, but even in the height of summer, the Scottish weather will be far more unpredictable than that in Georgia in the spring. St Andrews, however, is one of Woods’ favourite courses in the world, and his game is suited well to links golf which rewards precision and creativity over strength and power.