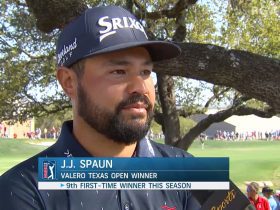 J.J. Spaun’s Shock Win at Texas Open Was the Last Chance to Make it to Augusta

Despite many rumors to the contrary in the last few days, Bryson DeChambeau has categorically stated he isn’t done with the PGA Tour.

Reports began circulating earlier in the week that DeChambeau had told some of his fellow pros that he wouldn’t be playing PGA Tour events anymore while at the Saudi International two weeks ago. The reports gathered pace quickly, to the point that DeChambeau felt the need to release a statement to put the rumors to bed. For now, anyway.

“There are many false reports going around by the media that are completely inaccurate,” DeChambeau wrote on his statement released via his social media platforms. “Any news regarding my health or playing schedule will come directly from my team and me only. This is just another inaccurate report. I look forward to getting healthy and seeing everyone soon!”

DeChambeau withdrew from the second round of the Saudi International after shooting a 3-over 73 in his first round, citing left wrist and left hip injuries as the reason for his withdrawal. He later claimed he fell earlier in the week. DeChambeau missed last week’s WM Phoenix Open and isn’t playing this week at the Genesis Invitational at Riviera Country Club.

DeChambeau’s agent, Brett Falkoff, has said that Bryson plans to rest and rehabilitate his left wrist and left hip injuries to regain fitness in time to defend his title at the Arnold Palmer Invitational at Bay Hill in Orlando, Florida, the first week in March. He also reiterated his client’s statement regarding the rumor he won’t play anymore PGA Tour events saying, “It’s absolutely false. It’s baseless speculation and completely untrue. The only reason he’s not playing this week is because he’s injured,”

Dechambeau is one of several high profile PGA Tour players to be constantly linked with a Saudi-backed breakaway league. It was reported in early February by the British press that DeChambeau has been offered a staggering $135 million to leave the PGA Tour and join the Golf Super League. DeChambeau came out and stated that the reports of such an offer were “wrong.”

This is the second time this month that DeChabeau has taken to social media to address his health and future. After reports began circulating that the world number 12’s excessive speed and weight training regime was causing his body to break down slowly, he took to Instagram and fired back.

“Everyone needs to chill,” DeChambeau wrote to his 854,000 followers. “Yes, I hurt myself but not from hitting it far. I slipped and fell this week on Tuesday, unfortunately. I know people probably [won’t] believe me, but that is the truth. I will be back stronger and better than ever in a few weeks. … Thank you for your concerns, and keep hitting bombs!! I will be back …”

DeChambeau hasn’t fared well in either of the PGA Tour events he has competed in this year. Before missing the cut last month at the Farmers Insurance Open at Torrey Pines, DeChambeau finished in a tie for 25th at the Sentry Tournament of Champions in Hawaii.

DeChambeau’s left wrist appears to have been giving him some trouble for a little while now. He withdrew in January from the Sony Open and was also seen holding his left wrist and grabbing his lower back on several occasions during his second and final round at Torrey Pines.

DeChambeau underwent an MRI following a consultation with a Colorado muscle expert in January but didn’t elaborate on the severity of the injuries.

Hand and wrist injuries have been bothering him since late last year, but the noticeable limp in the first round at the Saudi Invitational seemed to be a new problem, one he claimed is a result of a fall.

Brett Falkoff said in an interview this week that Bryson will rest up until a few days before he aims to defend his title March 3-6 at the Arnold Palmer Invitational.

“He’s going to do everything he possibly can to be there,” Falkoff said. “He’s absolutely focused on being at Bay Hill.”

In winning the tournament last year, DeChambeau remarkably almost drove the green on Bay Hill’s par-5 sixth hole, one of the most incredible moments of golf last year. He outdid himself at a sponsors’ outing in December at Bay Hill when he successfully challenged the pond and left his tee shot only 12 feet from the flag.