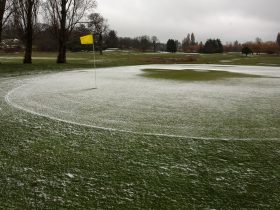 Dustin Johnson is sitting on top of the world. The world number one by a huge margin—and perched likewise atop the 2017 money earnings—he has put his troubled past behind him to become a dominant force in the game. Despite his prodigious talent, marked by an incredible length off the tee, Johnson for years failed to put it together—on and off the golf course.

As an adolescent, Johnson split his time between the homes of his divorced parents. He had trouble with the law and did just enough to get by at school. He was a talented golfer, though, and one of his high school coaches, Chris Miller, saw his misdemeanors as a product more of circumstance than poor character. He convinced Allen Terrell, coach at Coastal Carolina University, to take a risk that most schools weren’t willing to take. Johnson’s move to CCU proved instrumental in his development, both as a golfer and as a person. In 2007, aged 22, he began his charge towards pro golf by winning two amateur tournaments, as well as playing on winning Walker Cup and Palmer Cup teams. This success prompted him to take his talents to the professional world, where he quickly gained his PGA TOUR Card and had his first PGA victory within a year.

In 2010, just his third year on Tour, Johnson came heartbreakingly close to his first major title. Leading the PGA Championship by one stroke entering the final hole, he made what appeared to be a bogey. This would have put him in a three-way playoff Martin Kaymer and countryman Bubba Watson, but Johnson was penalized two strokes for grounding his club in a bunker on the last hole. Unfortunately, this was symptomatic of his game, which was at times elite and alarming in equal measures. He could put the ball as far off the tee as anyone, but could equally send it sideways. His ball striking had great potential, but he struggled around the green.

Despite this, he managed more than his share of victories in his first six years on Tour, underlying the extreme potential buried beneath missed fairways and three-putts. In the middle of 2014 though, he stepped away from the game to deal with personal challenges. Rumors circulated that this hiatus was the product of a positive drug test, though this was never proven. Whatever the circumstances, it served him well, as he came back stronger than ever in 2015. He achieved top 5 finishes in two of his first three tournaments following his return and won the fifth—The Honda Classic. This run of form saw him rapidly return to the top 10 in the world rankings.

It was 2016 when Johnson took his game to the level that so many predicted he was capable of. He won three events, including his first-ever major at the U.S. Open, and topped the earnings list by over US$1 million. This form has continued into 2017, where he is the money leader by almost US$1.5 million. He has managed this despite playing the least number of tournaments of the top eight money earners this year. He ranks first on Tour in driving distance at 312.1 yards while sitting 160th in driving accuracy. Nothing unusual for the enigmatic big-hitter, but a GIR percentage of 72.53 puts him at the top of the PGA TOUR, proving that a lack of precision off the tee is not damaging his ability to find the green as much as it once did.

This is a far cry from the prodigious talent who has, for years, seemed unable to put together either his golf game or his personal life. His family notes a direct correlation between his performance on the course and changes in his lifestyle. The father of two young children dropped almost 10 kilograms around the time he took a break from golf and also cut back significantly on drinking. These changes reflected a distinctly heightened commitment to golf and have paid dividends. The man who was once a frustration to so many—hugely talented but equally ill-disciplined—now seemingly has it all together. Johnson is now world number one in golf rankings. His potential, which for a time seemed destined to remain a fairytale, has finally become a reality.

See also: Kim: the Youngest Winner of THE PLAYERS