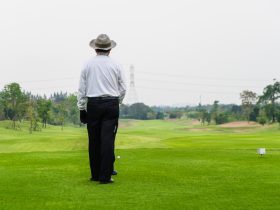 This week, Jordan Spieth can enjoy all the usual home comforts with TPC Craig Ranch in McKinney, Texas, hosting the AT&T Byron Nelson. Despite living in a different suburb from the course, the commute between The Spieth’s house and the course is short enough that Jordan won’t be the only golfer this week who will be making it.

Jordan, his wife, and their 6-month-old son Sammy have company this week in the form of Justin Thomas, his fiance and their dog, and Jason Duffner and his girlfriend. Spieth and Thomas seized the opportunity to play Southern Hills in Tulsa, Oklahoma, on Monday, which hosts the PGA Championship next week.

“I think in an ideal world [Thomas] would stay closer to the course, but I think he would have felt too guilty not staying at our house since we live here,” Spieth said during media duties on Wednesday. “So that’s kind of, he didn’t say that, but that’s probably how, when he’s driving home at rush hour, I think he’s probably like, ‘Man, you know, alright, I guess we got to go back there.’

Staying together on a tournament week isn’t anything new for these golfers; it’s something they do regularly; Spieth and Thomas stayed together for over 50% of the tournaments they both played last season. It’s just not too often it happens in one of their own houses.

“It’s nice hanging out at night,” Spieth said. “Get to kind of show him around Dallas a little bit and eat some good food, and then we’ll go on next week and do the same thing.”

Spieth and Thomas may even commute together on Thursday, with Thomas playing alongside Tom Hoge and Sam Burns at 1:55 and Spieth tee-ing off in the following group at 2:06 alongside world number one Scottie Scheffler and defending champion K.H Lee. Duffner will need to make his own way to work with a much earlier tee time of 9:18 a.m.

Spieth was relaxed on media day, joking that he would use his baby to tire out his house guests before clarifying that he was joking and he didn’t have a bad word to say about any of his guests.

“I don’t go into their room, so, no, he’s very clean; they’re great houseguests,” Spieth said of Duffner and Thomas. “I’ve got no complaints thus far, but it’s only Wednesday, so ask me later in the week.”

Both Spieth and Thomas will be confident heading into this tournament; they are both among the bookie’s favourites to walk away from here with the trophy and the winner’s cheque as the sun sets over Texas on Sunday evening.

Since winning the RBC Heritage last month, Spieth hasn’t played and leads the Tour for top-10 finishes in Texas with 15 to his name since 2013. He comes into the AT&T not only in great form but also well-rested.

Thomas is making only his second ever start at this event having not been seen here since 2015 when he tied 55th. His form suggests he will be a far more significant threat this time around. Thomas currently holds the longest active streak on the PGA TOUR, with 19 consecutive cuts made and six top-ten finishes already this season.

If Jordan Spieth or his guests end up victorious here, they will need to finish ahead of the world number one, and another Texas native Scottie Scheffler who has won in four of his last seven tournament starts.

Another Dallas native, Justin Leanord, who has 12 PGA TOUR victories, is teeing off for the first time at a PGA event since the 2017 Valero Texas Open. Leonard is 31 days away from being eligible to compete on the Champions Tour at the point of writing.

Nine of the world’s top 20 players tee off here on Thursday, and over half of the players in the top 30 in the FedEx Cup standings are playing this week.

This is the second time TPC Craig Ranch has played host to this tournament and will continue to host it for the next four years. There were 2007 birdies sunk here last year, the most at any PGA TOUR event, so expect a low scoring and exciting week.

See also: How to Stay in Shape for Your Game