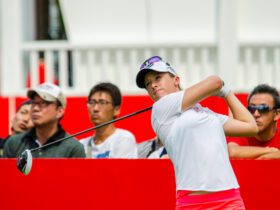 Marcus Armitage, also known as “The Bullet”,  is a rising golf star from the European Tour who is manifesting his destiny as a great. He is positive he can take on the world’s top golfers using Brooks Koepka has a par for his plausible success.

Armitage recovered from an appalling season in the 2019 Challenge Tour to secure his European Tour playing privileges. He made an impressive start in the season before the event came to a bottleneck due to the COVID-19 pandemic.

The talented English player was previously ranked No. 1300 in the world. But after finishing third place at the SA open and 12th position at the Qatar Master, he was skyrocketed to No. 439 in the world.

“Brooks Koepka in 2013 was on the Challenge Tour and he’s now been world No 1 and a four-time major winner,” Armitage told the Sky Sports Golf podcast. “That’s seven years ago, so world No 1 and multiple majors is possible, because you can’t tell me it’s not.

“The Bullet” is positive that if he was to play on his best day alongside other top golfers on their best day, he would compete well against them. The only difference would be his level of consistency.

“I may deliver once or twice in a week, But the likes of Tiger Woods, Rory Mcllroy, Brooks Koepka or Tammy Fleetwood might deliver four or five times a week,” Marcus Armitage said.

Armitage told the tales of his early junior success and how he managed with meagre prize money during the start of his professional career. He also explained the reason behind playing the 2019 U.S Open with a fractured shoulder while still maintaining to play a decent game.

Stepping up his game with his level of consistency is what he needs to take him up the world ranking according to Armitage.

Listen to the full podcast HERE.