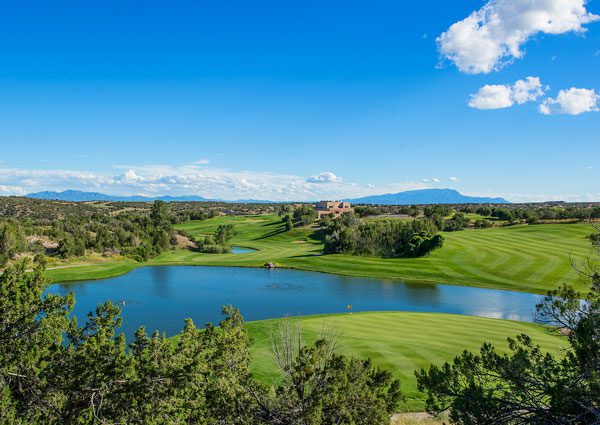 Santa Fe has long been an award-winning destination for culture, food, shopping, wellness, visual and performing arts and—of course—golf (for which the climate is prefect some 300 days of the year).

And Santa Fe, branded as “The City Different,” looks set to become an increasingly popular golf vacation destination, given the major investments that have been lavished on boosting the region’s many golf attractions. Here are six courses well worth adding to your bucket list.

Marty Sanchez Links de Santa Fe is just eight miles west of downtown. The course is named after an accomplished young local player who died tragically at age 24 in 1991. This is a high-end municipal course of country club standard, designed by Baxter Spann, of Finger, Dye and Spann, based in Houston. The 7,415-yard, par-72 championship course has five sets of tees, suitable for players of all levels, along with 360-degree panoramic mountain views that surround the Sangre de Cristos, Jemez, Ortiz and Sandia mountains, and scenic high-desert landscape.

Hilton Santa Fe Buffalo Thunder is home to the Towa Golf Club, which has three independent nine-hole courses that showcase dramatic landscape with stunning elevation changes. Each hole makes the most of the natural topography as well as the unique rock formations and natural vegetation indigenous to the region, providing excellent separation of the individual holes. The course’s fairways are a mix of Kentucky bluegrass, ryegrass, fescue roughs and native grasses.

Located on the Santa Clara Pueblo just north of Santa Fe is the Black Mesa Club, which has an 18-hole par-72 course designed by Baxter Spann, featuring 105 bunkers. The 7,307-yard course is located at an elevation of 5,400 feet, and its routing features an elevation change of over 125 feet. Once again the backdrop is dramatic, with sandstone ridges and moon-like rock formations, while the Black Mesa remains visible from much of the course. There’s a wide variety of holes within the overall design, each with their own memorable features and distinctive bunkering. And a short-game practice area presents golfers with many of the same challenges around the green that they will encounter on the course itself. A spacious 60,000-square foot teeing area also accompanies the range along with two practice putting greens.

Beginner and intermediate players will appreciate the par 3s and the relaxed speed of play on the Quail Run Golf Course, a par-32, nine-holer suited for all skill levels. The course also attracts advanced players who enjoy the precision required on the tight layout.

Consistently ranked as one of the best courses in New Mexico, the 6,817-yard, par-72 Cochiti Golf Club was designed by Robert Trent Jones Jr. Situated in the high desert between Santa Fe and Albuquerque, the views have prompted the nickname “Heaven with a zip code.”

The Club at Las Campanas features two Jack Nicklaus Signature courses, both consistently rated among the top courses in New Mexico. Members enjoy the strategic course design and thoughtful layout that weaves through the beautiful high desert area of northern New Mexico. Both of the award-winning, 18-hole courses offer an exceptional golf experience.

In the southeast corner of the Practice Park of the Golf Performance Center (GPC) at Las Campanas is a 2,800 square foot state of the art training facility which also has a lounge area, putting areas, three indoor/outdoor hitting bays, as well as an indoor golf simulator.