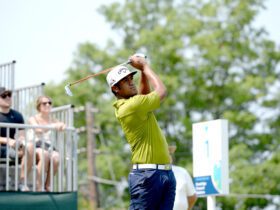 Tiger Woods winning the Player Impact Program, which hands out vast sums of cash to the players who move the needle positively for the PGA, was no surprise. Neither was the fact that the top ten finishers were made public knowledge almost immediately.

Once we digest the list and dig a little deeper, some fascinating side stories are buried deep within the inaugural PIP results, however.

No Rickie Fowler or Max Homa

When the Tour first announced its intentions regarding PIP, it simulated how the 2019 season would have played out. Tiger would have won, so no surprise there, but Rickie Fowler would have finished fifth behind Phil Mickelson, Brooks Koepka and Rory McIlroy. Fowler has been one of the Tour’s most marketable players for many years, but somewhat surprisingly, his name was nowhere to be seen in the results that the PGA shared on Wednesday. It would be interesting to see how close to the top ten Fowler was, but we will probably never know without the information at our disposal.

Like Fowler, the Twittering golfer, Max Homa, is another who many thought might be in the top ten. Homa is very popular across social media for roasting swings and generally having a lot of fun just being himself. Homa isn’t just a social media character, he also won multiple events in 2021 and hosted and appeared on many podcasts, and he, like Rickie Fowler, would surely love to know just how close he came to a top ten PIP finish.

Undoubtedly, Bubba Watson is the shock name in the top ten. Bubba hasn’t won a Tour event for over three years and isn’t in the top 50 in the world. He does have, though, 1.8 million followers on Twitter, 1.3 million followers on TikTok, and 940 thousand followers on Instagram, and he is posting regularly on all platforms. Despite not competing recently with the world’s best on the course, Bubba ranked first in the “MVP Index,” which the Tour defines as “Social Media: Social media score that considers a player’s reach, conversation and engagement metrics.”

Mickelson finishing behind Tiger Woods in itself is no surprise. Let’s be honest, Mickelson has been second to Woods his entire career, but the shock to some comes after Leftie made a bold statement in December where he claimed on his Twitter that he had claimed the top spot and won the first-ever Player Impact Program.

Following Mickelson’s claim late last year, journalists worldwide went to work to confirm his claim to be accurate, but it quickly became apparent that the results had not been finalised and that Woods, who Phil had stated, finished second, still had time on his side. In hindsight, it appears that Mickelson’s Tweet was a tongue-in-cheek attempt to boost his standing. Maybe it helped him; Mickelson finished with a higher MVP Index rating than Woods, finishing in 5th place, three places ahead of Tiger, who finished 8th on the social engagement scale.

Q-Score, defined by the PGA as “Awareness: A player’s general awareness score among broad U.S. population”, is one of the five metrics of the PIP. Many would expect that the infamous longest driver who constantly made headlines throughout the year and competed in made-for-TV matches would fare well in public awareness, but that wasn’t the case at all.

DeChambeau ranked 22nd in Q-score, ultimately his worst metric score of the five measured within the PIP. Luckily for Bryson, it didn’t cost him any money as players finishing 3rd-6th all earned the same amount of $3.5 million.

The PGA TOUR Insists ‘This Is Not a Social Media Competition’

Since the launch of PIP, many players and sections of the media have claimed that it is nothing more than a competition for the players to create massive engagement on social media. Even as recently as ten days ago, Patrick Cantlay said, “I think I’m old school in the respect that I would like the money to be doled out relative to play, and I don’t think the PIP does that. It may be the first departure that the PGA TOUR has had from rewarding good play to rewarding social media or popularity presence, so I don’t like that departure.”

Cantlay is not a fan of the Player Impact Program but is he correct in what he says? Social media engagement plays an integral part in the overall result, but it makes up only 20% of the system.

The PGA TOUR offered further clarity alongside the publication of the results, saying, “While many have been under the impression that the Player Impact Program is a ‘social media contest,’ the scope of the metrics includes five criteria obtained from objective, third-party data measurement services.”

See also: Rory McIlroy Pleads for Phil Mickelson to be Welcomed Back to PGA Tour