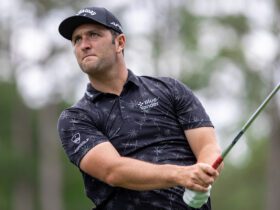 The event before the Masters offered the field one final opportunity to make it to Augusta.

No golf fan would argue that the first three months of the year haven’t been an exciting journey so far. Scottie Scheffler becoming world number one and the Monday finish at the Players Championship a few weeks ago were the cherry on top of the icing on the cake of the first quarter’s golf.

Many may be looking forward to next week at Augusta, but before that the tournament in San Antonio offered one final invitation to compete at the Masters.

The field in Texas was a relatively strong one, and it promised to be an exciting prelude to the big one in Augusta.

Rory McIlroy was one of the favourites in what was only his fourth PGA TOUR event of the year. McIlroy’s game is in a good place, and we can expect him to be an integral part of next week’s Augusta storyline in his eighth attempt at completing the career grand slam.

Both McIlroy and Jordan Spieth oped to skip the WGC-Dell Match Play the previous week, and it will be fascinating to see how well they play over the next two weeks. Both players were among the favourites for both tournaments. Spieth was the defending champion in San Antonio and was looking to use a course he likes to gain some confidence and momentum after only one top ten finish in nine starts so far in 2023.

Another interesting side note was the final spot available for the Masters, which would go to the event’s winner if he is not already in the Masters.

Richard Bland was one of those hoping to snatch it, having come very close at last week’s matchplay event. If it hadn’t been for a narrow loss to Dustin Johnson in the Round of 16 at Austin Country Club, he would have jumped into the world’s top 50 and secured his spot at the Masters. Instead, he is ranked at number 53 and needed to lift the trophy at TPC San Antonio to secure his first Master’s invite.

Bryson DeChambeau returned to PGA TOUR action for the first time since January and was far from his best. It is difficult to judge a player’s form in matchplay golf, but the week undoubtedly gave us a better idea of whether we can expect a good DeChambeau showing at Augusta. DeChambeau has struggled at Augusta National in the past and the fact he was in Texas at a tournament he has generally opted to miss in the past possibly indicates that he has concerns about his game ahead of the first major of the year.

DeChambeau, along with the aforementioned McIlroy and Spieth, was certainly capable of winning and, more importantly, in the big one, so all three’s performances were exciting to watch in Texas with the Masters in mind.

Another player worth keeping an eye on this week was Kevin Streelman. Nothing in his recent numbers suggests he will be in serious contention, but his history at TPC San Antonio is phenomenal. If we look at the players who have played at least ten competitive rounds here, Steelman ranks sixth in strokes gained, and he has finished in the top ten in his last two outings. His form is alright, not really any better than and indeed not poor, tied seventh and sixteenth in his previous two tournaments. Most golf fans would argue that it is always worth looking at tournament history to bank on a golfer rather than the current form.

The field was relatively strong at the 2022 Texas Open, with a few major winners hoping to be in contention and all hoping to find form and confidence to carry into next week – Hideki Matsuyama, Keegan Bradley, McIlroy, Spieth and DeChambeau. Tony Finau, Corey Conners and Abraham Ancer could all have joined the five major winners in being confident of doing well.

Certainly with some of the world’s best golfers in Texas, watching them battle alongside the golfers outside of the world’s top 50 hoping to grab that final Augusta spot made for an exciting tournament.

The final results, though, came as a surprise to everyone. In his 147th PGA TOUR start, J.J. Spaun won his first PGA Tour event, and his first invite to the Masters, shooting a final-round 69 on the closing Sunday.

“I was thinking about the Masters last night,” Spaun said. “But I think a year ago, to think I would even be here playing on tour, I’d have to do a lot of work. To finally get a win, it’s what you dream about.”

In his 2020-21 season, J.J. Spaun missed more cuts than he made, including a missed cut at the Texas Open, and had only one top-10 finish. He then had to play in the PGA’s Korn Ferry Tour last year to retain his tour card. In October, Spaun was ranked No. 396 in the World Golf Rankings. Sunday’s tournament win includes a $1.54 million prize.

Spaun’s double-bogey final round start before getting the victory is very rare – in fact the last time it happened on tour was in 2008, when Tiger Woods won the U.S. Open. “It didn’t bother me as much as you would think,” Spaun said. “I knew there was a lot of golf. I’d rather double the first hole than the last hole.”

Keegan Bradley shot a final-round 66, finishing in a tie for eighth at 9-under with Matthias Schwab (68), Gary Woodland (70) and third-round co-leader Dylan Fittelli (73).

See also: Speculation Grows That Tiger Woods Will Play at the Masters