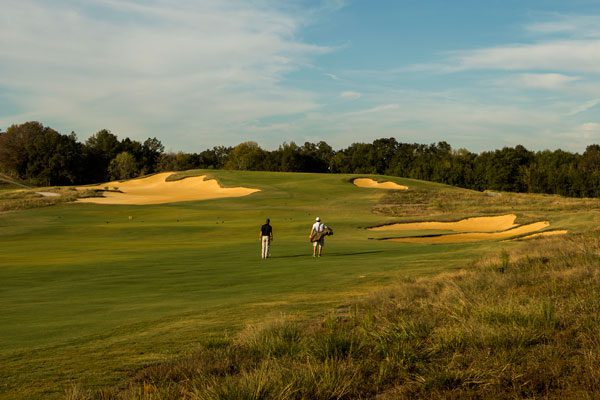 If you’re planning a golf trip to the East Coast, read on for a comprehensive list of the best golf courses in New Jersey.

New Jersey state might sit in the shadows of New York’s Lower Manhattan, but there is a lot to be said for the golfing options across the Hudson River from the Big Apple.

It might be the case that New Jersey is the fourth smallest state in the United States, but don’t let that put you off contemplating a golf trip—whether than is in the northern part of the state close to New York, along the western fringes of Newark and close to Philadelphia or along the Atlantic coast to the south.

Essential Golf take a look at five of the best golf courses in New Jersey.

The number one among golf courses in New Jersey—and one with plenty of heritage, too. Baltusrol Golf Club is located in Springfield and has hosted seven U.S. Opens, two PGA Championships and the U.S. Women’s Open Championship twice.

Jack Nicklaus and Phil Mickelson are among the famous names to have won there. The 36-hole venue boasts the Lower and Upper Courses with the former being the pick of the pair with a 647-yard par-5 17th among the feature holes. The private members club was first opened for play in 1895.

Pine Valley Golf Club sits on the New Jersey side of Philadelphia in the west of the state and it is one of the gems of golf in the United States.

First opened in 1913 and remaining as a private members club, Pine Valley is regarded as one of the toughest courses to play anywhere on the planet. The size of the venue means it has missed out on hosting major tournaments, but it has staged the Walker Cup on two separate occasions.

Plainfield Country Club is one of the oldest golf clubs in the United States, let alone New Jersey, having opened in 1890.

The course itself offers something of an older style challenge, too, with plenty of blind tee shots and approaches to greens at the private members club in the south of NJ a short drive from Newark.

Plainfield hosted the U.S. Women’s Open in 1987 and also staged a FedExCup Series event twice in 2011 and 2015. It was also at Plainfield Country Club that golf’s handicap system was born thanks to member Leighton Calkins.

Situated across the Hudson River from Manhattan and Yonkers in New York City, Ridgewood Country Club offers a great escape from the Big Apple. It takes pride of place in our list of the best golf courses in New Jersey.

There are 27 holes to explore on the East, West and Centre Courses, but it is the East and West which make up the best loop. Ridgewood is a Ryder Cup host venue having staged the 1935 edition. It also staged a FedExCup Series event on three occasions across the last decade.

Located west of New York close to Bernardsville, Somerset Hills is a course that has been cleverly crafted into the land.

The opening nine holes of this private members club golf course have been designed on land that was formerly a racetrack. From there, the back nine features hilly woodland—it is a real eclectic mix of holes that will test any golfer.

If you have enjoyed our list of the best golf courses in New Jersey, click here to read more about where to play the great game in Florida, New York, Ohio, Mississippi and Georgia.