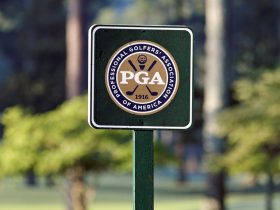 US Department of Justice to Probe PGA TOUR “Anticompetitive Behavior”

Everybody loves Netflix, well, don’t you? Most people cannot resist the urge to include at least an hour of streaming their favorite content into their daily schedules. Now what’s even more exhilarating is when two of your favorite hobbies combine: Golf and Netflix. If you are a staunch golf fan, skeptic, or an undecided person who would love to dive more into the world of professional golf, you’ll be pleased to learn that Netflix is premiering an action-packed golf series dubbed Full Swing on Feb 15th. The much-awaited series will feature eight episodes in its first season and follow the lives of your favorite pro golfers on and off the golf course.

How it All Began

After the mammoth success of Drive to Survive, Box to Box Films has partnered with Vox Media Studios and the PGA TOUR to produce Full Swing, which will shed light on the lives of the world’s best golfers and what it takes to play golf at the highest level. The idea to produce Full Swing was birthed in late 2021, notably by Paul Martin of Box to Box Films and Chad Mumm of Vox Media Studios. The show mainly captures the events of the 2022 golfing season, especially during a dramatic season that saw the entry of the Saudi-backed LIV Golf series and what seemed to be a significant split in the world of golf.

From the show’s trailer on the Netflix website, one can tell that Full Swing will offer golf fans the experience of a lifetime as they connect with their favorite stars’ personality traits. Although it’s fun to see Rory McIlroy lift the FedEx trophy or Scottie Scheffler tee it off on the course, getting a behind-the-scenes glimpse into their houses, cars, private jets, spouses, kids, losses, wins, injuries, and all the drama is guaranteed to keep the golf community glued to their screens. All eight episodes of season one will premiere internationally on Feb 15th, and some golf fans may binge on the show and complete the entire season that same day.

You can expect a star-studded cast comprising of Brooks Koepka, Tony Finau, Rory McIlroy, Justin Thomas, Jordan Spieth, Matt Fitzpatrick, Scottie Scheffler, Collin Morikawa, Ian Poulter, Joel Dahmen, Dustin Johnson, Sahith Theegala, Mito Pereira and Joaquin Niemann. If you have ever dreamt of meeting one of these stars up close, Full Swing will be the closest you get to it as you keenly observe their character on and off the course. You will find answers to questions like what Brooks Koepka wears at home or how Justin Thomas interacts with his family in the series. The series will also cut across all the four major championships, giving you a full dose of ecstatic golf action.

Most golf fans will seek to find out how the rivalry between the PGA Tour and LIV Golf stars has affected their relationships. The show takes place during the heated 2022 season, where all the drama happened, with players like Koepka, Johnson, Niemann, and Poulter deciding to follow the fat money bags of LIV Golf. A staunch PGA golfer like McIlroy has been very vocal in his criticism of the new league, and it will be fascinating to see how the show’s producers have worked around this raging storm. Most documentaries and reality shows never miss heated arguments or even fist fights, and it would be fun to watch which golfers have a short fuse and a tendency to cause trouble.

Full Swing premiering on Netflix is arguably one of the best news for the golf community in 2023. Other mainstream sports have left golf behind in terms of social media attention and global awareness, and the new show could be a step in the right direction to expose more people to the sport. Judging by the success of F1’s Drive to Survive and considering that the same brains are behind Full Swing, it’s all fingers crossed on Feb 15th to see whether the producers deliver on the promise and market golf to a broader golfer audience. The best thing to do is renew your Netflix subscription on time and get your popcorn ready as we go full swing on the new series.