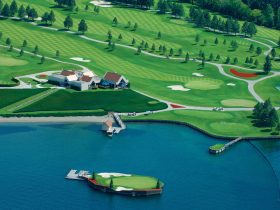 Coeur D’Alene Resort Golf: The Course With the Floating Green

The United States will take on their International counterparts in the 2019 Presidents Cup at Royal Melbourne Golf Club in Australia between December 9-15, and captains Tiger Woods and Ernie Els now know their eight automatic qualifiers.

Woods will lead the United States team into battle and will have a star-studded line-up to choose from even before his four picks, which will be revealed in early November and could yet see the 15-time major winner name himself among the playing squad.

Els, who will also complete his selections in the same week that Woods announces his picks, will have a mix of youth and experience at his disposal as the Internationals bid to avenge the 19-11 defeat suffered at Liberty National Golf Club in New Jersey in 2017.

The eight automatic qualifiers for the US team all sit within the top 20 in the Official World Golf Rankings and have won 11 PGA Tour events during the qualifying process.

Matt Kuchar, the most experienced member who will be playing in his fifth Presidents Cup, is joined once again in the side by fellow 2017 winners Brooks Koepka, Dustin Johnson and Justin Thomas.

Xander Schauffele, Bryson DeChambeau and Patrick Cantlay, meanwhile, will be playing in their first Presidents Cup after making Woods’ team.

Kuchar, Johnson and the eighth automatic qualifier Webb Simpson all played at Royal Melbourne Golf Club when the US won in 2011 and will be back there again.

“This is the core of the team. These guys have earned it. They’ve proven that they belong on the team,” said Woods. “You’ve got some veterans, whether it’s Webby, Kuch or Dustin, who have been part of the teams for a very long time, and we have some newcomers. We have a nice mix.

“It’s a younger team, and that’s what we want to see. We want to see a little turnover and get the younger guys playing on these teams because they’re going to be a part of it for a very long time going forward.

“Really, I can’t wait to get some of these young guys down to Royal Melbourne to experience golf in the Sandbelt Region and get to experience how much the fans love and appreciate sports and golf in that area of the world.”

Els will have at least three Australians in his side on home turf after Marc Leishman, Adam Scott and Cameron Smith secured their spots in a line-up that has 17 previous Presidents Cup appearances between them.

Scott is an eight-time veteran and Leishman has played in three previous editions, with the duo joined by Japan’s Hideki Matsuyama and South African Louis Oosthuizen, who also have represented the International team three times.

Smith will be one of four debutants for Els’ side with Mexico’s Abraham Ancer, China’s Haotong Li and CT Pan from Chinese Taipei also set to make their first appearances.