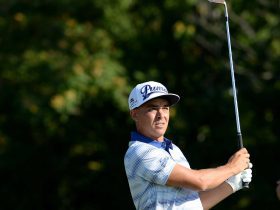 The Players Who Haven’t Made the Lucrative FedEx Cup Playoffs

An exhibition at the The University of St Andrews in Scotland, often cited as the birthplace of golf, says that “gutta” golf balls in its collection are the products of British colonialism.

The exhibition, funded by Museum Galleries Scotland, is taking part in a re-examination of its exhibits as part of a Scotland-wide review of national ties to the historic slave trade. The St Andrews display now highlights financial connections between St Andrews and figures who profited from slavery. Similar re-examinations prompted by the Black Lives Matter protests in 2020 are going on in museums all over the world, which are re-examining and re-displaying artefacts in order to highlight any potential connections to colonialism and the slave trade.

The Re-Collecting Empire exhibition, which will run at St Andrews affiliated Wardlaw Museum until October, also includes displays of the work of European textile mills, inspired by styles “that originated overseas” in the colonies – and therefore “exploited the originating culture”.

Dr Emma Bond, St Andrews academic and exhibition consultant, said: “The Re-collecting Empire exhibition opens at a time when museums and galleries across the UK and beyond are rethinking how best to care for objects in their collections that were acquired during periods of colonial rule.”

St Andrews has an association with golf dating back to the 15th-century, with space being set aside for playing the game in 1552. The Royal and Ancient Golf Club of St Andrews, founded in 1754, is credited with first codifying the rules of the game in its modern form, and the St Andrews golf links remain a focal point of the game.

Gutta percha golf balls were introduced in the 1840s, replacing the traditional ‘featheries’ and ‘hairies’. Gutta-percha is a dried gum resin from guttiferous trees, especially of the Malaysian sapodilla tree, and was often used in packaging. Various attempts were made to use it to manufacture golf balls cheaper than featheries, but it wasn’t until the 1870s when they were made with moulds and marked with grooves to improve performance that they really caught on. Gutties were largely replaced by wound core balls using Haskell’s patent from the 1900s.