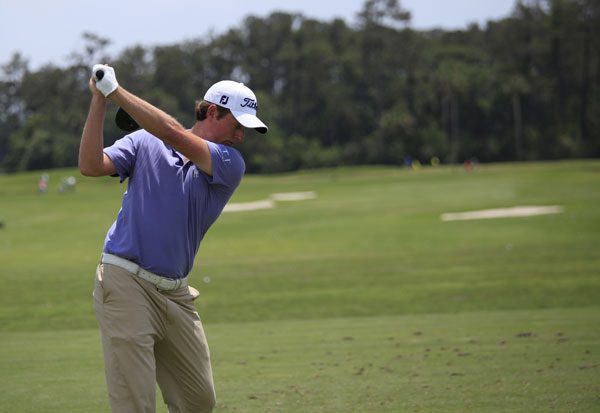 When 15-year-old Ukranian golfer Mykhailo ‘Misha’ Golod stepped off the plane at Orlando International Airport, it marked the end of a marathon journey for the teenage sensation. The teenager and his mother had made the journey to escape the war zone back in their homeland of Ukraine – and while his safety is now assured in the States, it has come at a price.

Mykhailo’s father and grandparents had to remain in Ukraine due to martial law, and his mother will return shortly to the country to be with them. Although far from a certainty, it is likely that his mother and grandparents will be allowed to travel to the US, but Mykhailo is unsure if and when he will see his father Oleg again.

See also: ‘Nothing We Could Do to Fix the Pieters Situation’ Says Referee

The young Ukrainian golf sensation is incredibly grateful and appreciative of his safety in the US; thoughts of most of his family, being stuck in his homeland amid Russia’s attacks on his country, are understandably weighing heavily on him.

“It’s very devastating, but thankfully, they all have Wi-Fi and a source of internet, food, water, and I can still talk to them and make sure they’re safe,” the teenager said, “And I know that once everything is over, I’ll definitely bring them here to be with me.

“My father will only be able to leave once the martial law ends. And otherwise, he’ll have to stay in there, and we’ll hope for the best.”

After Russia invaded the Ukraine, Golod and his family did what most Ukrainians did and bunkered down in the capital Kyiv with the expectation that it would all be over quickly.

Golod said that for the first week and a half, the Russian bombardment of Kyiv and the subsequent explosions were not close to their house but as soon as that changed, it was time to make an emergency escape plan.

“But… the moment we knew that the bombardment was in our town, we knew we had to leave and get me out,” Golod said.

Golod’s golfing ability was what offered him the opportunity to forge an escape plan, one which they have gratefully grabbed with both hands. The 15-year-old is one of the hottest golfing prospects in Ukraine and has already participated in tournaments worldwide.

Last year, Golod competed in the United States Golf Association’s (USGA) US Junior Amateur, which took place at the Country Club of North Carolina. It was the first time a Ukrainian golfer had competed in the event.

A US Visa that Golod had obtained from playing in that tournament helped him to re-enter the USA, and upon realization of this, the gruelling 54 hours and the 5000-mile journey began. The journey started in a car and finished when he landed in Orlando, Florida. Having touched down in the US, Golod condemned what is going on back in his homeland.

“Something that’s happening in Ukraine should not be happening in the middle of Europe in the 21st century,” he said. “Kids are losing their homes. They’re dying. They’re losing their lives. And it’s devastating, and people should know the truth because there’s a lot of fake news going around. But in reality, what’s happening is the whole country’s being destroyed. It’s not demilitarization or denationalization, it’s actually being destroyed by (Vladimir) Putin, and it has to be stopped.”

Golod was interviewed by Golf Digest whilst still in Kyiv, which highlighted his and his family’s dire situation, and members of the golfing community pulled together to try and help the promising young golfer.

Nugent said that reading about Golod’s story “played to my soul a little bit”, leading to Leadbetter and his offering their help.

“And so I called (Leadbetter), and we talked about it, and he said: ‘Well, we’ve got to do something about this.’ I said: ‘What do you have in mind?’ He said: ‘We’ll get him out of Ukraine. We’ll get him into my academy in Orlando, Florida, and I’ll get him in school, and he’ll begin a new life,’” Nugent explained, saying at first he thought the plan was “a bit farfetched.”

And that was it; they knew what they wanted to do. They then set about making it become a reality and setting the young man off on his journey.

Nugent firstly set about getting financial commitments from USGA and the Country Club of North Carolina to assist in his journey from Ukraine. The second step was launching a fundraising page to allow the public to donate to Golod’s cause. At the time of writing, this page has almost raised $35,000.

Nugent said that this outpouring of support in the form of donations had meant the absolute world to the young Ukrainian and his family.

“I don’t know that it’s fair to say that we’ve saved a life, but certainly the arc of his life has been changed forevermore,” Nugent said.

See also: Golf’s Biggest Event of the Year – the Masters