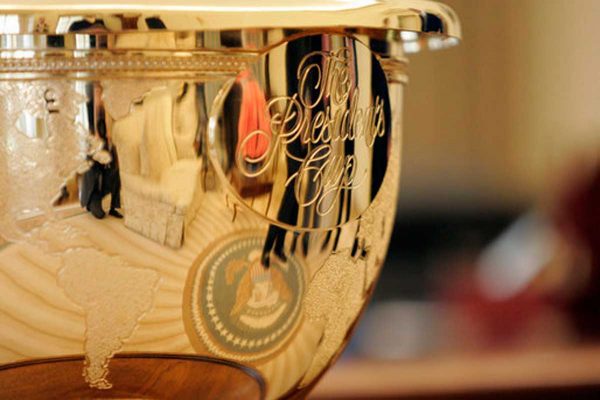 The United States will bid to make it 21 years of holding the Presidents Cup when they go head-to-head with the International team at Royal Melbourne Golf Club in Australia from December 12-15.

The American team have dominated the event since losing for the first and only time back in 1998, ironically at Royal Melbourne, and playing-captain Tiger Woods will be looking to lead his side to another success in the 13th Presidents Cup.

Can Ernie Els pull off victory and lead the Internationals to victory in Australia? Or will the star spangled banner be raised once again on the back of another American victory?

In the 12 previous Presidents Cup, America lead the way with 10 victories to one for the Internationals. The only tie came back in 2003. It is now seven wins in a row for the United States, the most recent of which was a 19-11 success at Liberty National Golf Club in New Jersey in 2017.

Captain Woods named himself as one of four wildcard picks for the US team along with Patrick Reed—who faces up to some major scrutiny after being caught up in a cheating storm last weekend—and debutants Gary Woodland and Tony Finau.

However, Koepka has been forced out of the Presidents Cup after failing to recover fully from post-season knee surgery, and his place in the line-up has been taken by Rickie Fowler.

The International team originally had four Australians set to play on home soil, but that will now be a trio of automatic qualifiers in Marc Leishman, Adam Scott and Cameron Smith after wildcard pick Jason Day withdrew due to a back injury.

Day’s place has gone to An Byeong-Hun, who is one of seven rookies in the team along with fellow wildcard picks Im Sung-Jae and Joaquin Niemann as well as qualifiers Smith, Abraham Ancer, Li Haotong and CT Pan.

The remainder of the International line-up is made of wildcard Adam Hadwin and automatic qualifiers Hideki Matsuyama and Louis Oosthuizen.

Royal Melbourne is rated as one of the world’s top-ten golf courses and has hosted some of the sport’s biggest events including the Australian Open 16 times and the Women’s Australian Open during a rich history dating back to 1891.

Located on the edge of Melbourne, there are two 18-hole tracks at Royal Melbourne—the West Course and East Course—and they rank as Australia’s best and sixth best respectively.

For the 2019 Presidents Cup, The Composite Course made up of holes from both the West and East Courses will be used, as was the case when it was put together for the first time back in 1959 when Royal Melbourne hosted the World Cup.

In total, the Presidents Cup will be played on 12 West Course holes and six from the East Course routing, the 18 holes combining for a par-71 test measuring 7,032 yards.