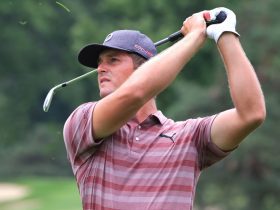 PGA TOUR Player Impact Program: The Players Most Likely to Benefit This Season

Justin Thomas and Jordan Speith eased to victory against Tiger Woods and Rory McIlroy in the seventh edition of The Match.

The American duo, who share five major titles, recorded seven birdies at the exhibition match in contrast to Woods and McIlroy’s one, to cement a 3&2 victory at the 12-hole contest at Pelican Golf Club in Florida.

Despite Woods admitting to not hitting a golf ball for over a fortnight, he tied the first hole with a birdie. Thomas and Spieth then took control, rolling in a long-range birdie at the second and draining from 15 feet at the par three respectively.

The world no. 1 then miscued a 12-foot birdie to win the next as the teams shared the sixth with pars but McIlroy came back with a 20-footer at the seventh, the only hole he and Woods managed to win.

Thomas and Spieth then managed to wrestle back control of the contest on the next hole with Thomas rolling in from 12 feet for a birdie and then Speith matched Woods and McIlroy’s birdie on the 10th which was enough to secure victory.

The event raised money to support relief efforts in Florida after Hurricane Ian struck in October.
“Tiger and Rory, what happened?” Thomas and Spieth said on Twitter after the win. “How do you lose to us two? It’s alright, everybody does!”

All the players taking part were mic’d up including Tiger Woods, in his first televised appearance since the 15-time major winner failed to make the cut at The Open in July. The 46-year-old withdrew from the Hero World Challenge earlier in the month. But this was Woods’ third appearance participating in The Match after the inaugural event in 2018 where he lost to Phil Mickelson and in 2020 where he stormed to victory alongside his teammate NFL quarterback Peyton Manning.

Woods’ next appearance on the course will be at the PNC Championship next weekend.

SEE ALSO: Tiger Woods and Rory McIlroy to Team Up Against Jordan Spieth and Justin Thomas in The Match