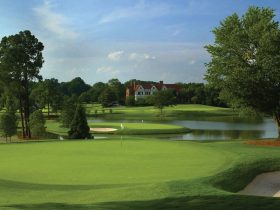 All You Need to Know: the TOUR Championship

The professional golf season is a nearly year-round affair, and there has been pretty exciting stuff already this year. However, much of the big news around the tour lately hasn’t actually involved the game of golf, but rather LIV Golf’s progress in signing up top players. So all eyes are on the upcoming players who might fill the holes opening up in the PGA TOUR’s rankings. Here are the top five players to look out for in 2023.

Rasmus Hojgaard is a three-time European Tour winner who is still in his teens. That alone makes him a strong threat as we enter the 2022/2023 seasons!

He turned pro three years ago in February 2022, and while he’s still far behind our top two players on this list in terms of ranking—presently he’s ranked number 63—he’s on the rise.

The numbers suggest that the Dane has a terrific all-around game, while his driving distance is a touch shorter than normal (22nd in the 2021 Euro Tour season). He’s also working on his wedge game, but based on his rising trajectory, he and twin brother Nicolai will be in the top five players in 2023.

Morikawa is only a few years into his professional career, but he’s been at the top of his game since the beginning. He is presently rated second overall and already has two major titles and five PGA Tour victories to his credit.

Morikawa is unquestionably the strongest iron player in the game. His putting game is very solid, so while his drive isn’t the strongest, he compensates for it close to the green, as evidenced by the roughly 1.5 strokes he achieves on strokes into the green per round.

Despite his enormous success with irons, data suggest that several younger golfers still choose a dominant drive over the nuances of irons and putters.

So, while he trails DeChambeau in driving distance, his excellent consistency with his irons and putter predicts that he’ll only become better in 2023.

Patrick Cantlay, aka Patty Ice, debuted as a pro in 2012, but he’s been on a rampage since 2017. He is now ranked third and was number one in the World Amateur Golf Rankings for nearly a year.

While stats show that his game is much different from that of iron-master Morikawa – high drive distance and accuracy, average on approach and green – Cantlay is certainly worthy of keeping an eye on and stands a good chance of being in the top five players as we move through 2022 and into 2023.

There’s no doubting that Jon Rahm is at the peak of his game as he enters week 37 as the world’s top golfer.

Rahm has a similar drive distance and accuracy to Collin Morikawa. Statistics also indicates that he is less accurate with approach shots, but he has a good game around and on the green.

Stats show a consistent upward trend in his ranks after turning pro in 2016. With his remarkable cumulative total of weeks at the top and a track record of consistent progress, Rahmbo can only expect great things in 2023.

Viktor Hovland is another promising young golfer to keep an eye on during the 2022/2023 season. His game is solid from drive to putt, although stats show he’s especially powerful around and on the green. These are vital talents to have in a game that is increasingly more about finesse than power.

He’s now ranked third in the Official World Golf Ranking, and with a handful of victories under his belt and a consistent upward trend in performance since turning pro in 2019, we expect nothing but good from him as the year progresses.

Golfers come and golfers go – some stick around for years and others bowl in, win a tournament and then we never see them again.

Sergio Garcia, Tiger Woods, Ian Poulter, Lee Westwood and Paul Casey are all names that we know and love (or loathe) when it comes to golf and were once on a list like this of up and coming golfers to keep an eye on – we have come up with who we think will be the ones to look out for in 2023.

Don’t forget the newbies though; Guido Migliozzi, Robert MacIntyre, Matt Wallace and Calum Hill are all names that will certainly be hitting golf balls as well as the headlines and may be among the top five players to look out for in 2023.