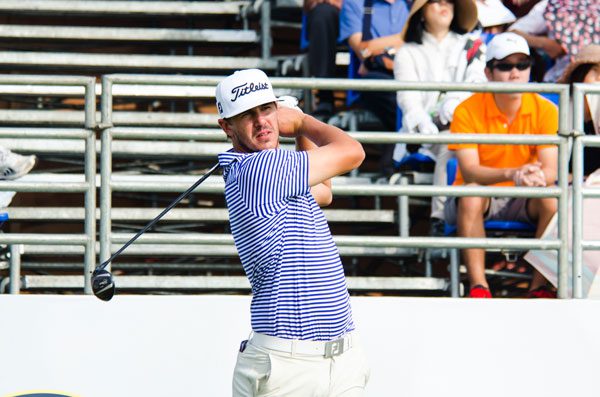 The PGA of America has named David Cannon of Sussex, England as the second recipient of the Lifetime Achievement Award in Photojournalism. Cannon and his work will be celebrated on May 18th in the lead-up to the 2022 PGA Championship at Southern Hills Country Club in Tulsa, Oklahoma.

Recognising the vital role that photography has in chronicling the rich history of golf, the PGA of America celebrates individuals who have promoted and honoured the game by establishing the PGA Lifetime Achievement Award in Photojournalism.

David Cannon’s citation follows that of his friend, Leonard Kamsler, who was the inaugural recipient of the Lifetime Achievement Award in Photojournalism from the PGA in January 2020.

Cannon, 66, – who appropriately uses Canon cameras – has worked for Getty Images since 1998, when the media company purchased Allsport, where he began working in 1983 and was elevated to director and part owner three years later.

“David Cannon’s choice images have long served the game of golf as historical markers that allow the greatest stories to be shared in the visual form in perpetuity,” said Jim Richerson, President of the PGA of America.

“His technical mastery and artistic proficiency are renowned, but it is his warm smile and enthusiasm for his craft that made him an institution in Major Championship golf circles. On behalf of the PGA of America, I salute David for his career achievements in the area of photojournalism and look forward to more in the years to come.”

A high-level amateur golfer during his late teens and early 20s, Cannon competed against the likes of Sir Nick Faldo and Sandy Lyle and, in 1974, was selected for the English youth squad training program.

His interest in photography began on November 18, 1978, when he was invited by a close friend, Neville Chadwick of the Leicester News Photo Service, to work a Midland Counties-New Zealand All Blacks rugby match in Leicester, England. Using his first professional-grade camera: a Canon AE-1, Cannon’s initial foray resulted in the Sunday Express using one of his images to anchor its sports section.

“From that second onward, I basically stopped playing serious golf and every bit of spare cash I had went toward buying camera equipment,” said Cannon, who has travelled the world ever since covering every sport imaginable.

According to Cannon, soccer is “the best sport to learn photography on. If you can shoot (soccer), you can photograph any sport in the world. In any one game, there are no predictable plays on the pitch.”

Originally his work with Allsport focused on soccer, leaving his summers open. Golf photography would never be the same.

“To jump from soccer to golf is liberating with all of the space to manoeuvre, but you are quickly reminded just why golf is also so hard. It is played over around 200 acres and the range of most top cameras is 40-50 yards. If you are not in range, good luck!” he says.

Cannon had a pre-existing “soft spot” for Ballesteros, beginning when the two played together in a May 1976 pro-am at his home club, The Leicestershire Golf Club after a nearby European Tour event.

“In 1984, when Ballesteros won the Open for the second time, I got what has become an iconic sequence of him holing that famous putt on 18, which I presented to him. He was really appreciative of those pictures and what they represented” says Cannon.

Cannon added another iconic image to his portfolio weeks later at the 1984 Summer Olympic Games, when he captured an enduring image of an accelerating Carl Lewis – elevated and mid-stride – en route to winning gold in the long jump.

His 1986 shot of Jack Nicklaus – putter raised on the 17th green and on the precipice of history at the Masters – is another image that has withstood the test of time.

Cannon photographed every Ryder Cup from 1985 to 2018 (travel restrictions precluded him from attending the 2020/21 Ryder Cup last September at Whistling Straits).

“I have come to understand that the Ryder Cup is the most exciting event in golf for me to photograph,” said Cannon, who served as the official European Team photographer from 1995 to 2018. “It’s the way the players react, their emotions. You get more celebration and emotive moments in three days than you do in 12 months on tour.”

Cannon cited his 1991 shot of José María Olazábal jumping up and nearly over the back of Ballesteros – his fellow Spaniard and playing partner – as his all-time favorite Ryder Cup image.

Cannon estimates he’s taken over 3.4 million frames either on film or digitally, flown 2.6 million miles while visiting 115 countries, walked 13,000-plus miles on golf’s greatest courses and slept 5,000-plus nights in hotel beds.

“Over the last forty years, my ambition has been to leave an important legacy to the sport” he said. “And while I am not done just yet, I hope this award serves as an annual reminder that (photographers) put an awful lot into the game of golf.”

See also: A Home for Golf in Portugal