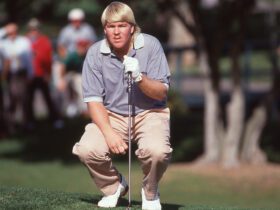 Victor Perez held onto victory in a dramatic Abu Dhabi HSBC Championship to boost his chances of taking part in this year’s Ryder Cup.

The Frenchman, who began the final day a shot behind joint leaders Shane Lowry, Francesco Molinari, and Min Woo Lee, posted a six-under 66 to secure the biggest win of his career.

It is Perez’s third DP World Tour win following triumphs at the 2019 Alfred Dunhill Links Championship and last year’s playoff win at the Dutch Open with history also being made, becoming the first French winner of a Rolex Series event.

The 30-year-old was on the brink of victory when he executed an exceptional bunker hole-out at the par-three 17th to take a two-shot lead going into the final hole where he bogeyed to finish 18 under and cement his one-shot victory.

The victory moves Perez to second in the European Ryder Cup qualification standings.

“I got off to a good start and I was just focusing on me and trying to do the best I can, because you can’t control what anyone else is doing. I was trying to plod along, but Seb [Sebastian Soderberg] was fantastic, he never gave me an opening.

“I’m just delighted to finish on top. It was a crazy finish but I’m used to that by now. Hopefully I can make it a little easier for the next one. It [bunker shot on 17th] came up a little skinny, I’m not going to lie, and then spun back and the just the fortune of the ball going in. It’s probably the greatest shot I’ve ever hit.”

Australian Lee carded a 68 to finish joint second alongside Sweden’s Sebastian Soderberg who finished with a 67.

The next event on the DP World Tour is the Hero Dubai Desert Classic which takes place between January 26–29 in Dubai.