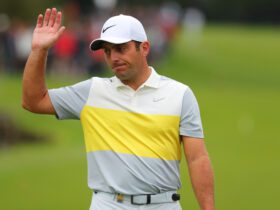 Former Wales, Real Madrid, and Tottenham star, Gareth Bale, has confirmed that he will be taking part in the upcoming AT&T Pebble Beach Pro-Am on the PGA TOUR, just weeks after retiring from professional soccer.

The 33-year-old, who is Wales’ most-capped male player and international goalscorer will compete in the tournament alongside several other celebrities such as Green Bay Packers quarterback Aaron Rodgers as well as world-renowned golfers including U.S. Open champion Matt Fitzpatrick, World No. 5 Patrick Cantlay and three-time major winner Jordan Spieth.

Confirming his participation on Instagram, the Welshman posted: “Delighted to announce I will be playing in the AT&T Pebble Beach Pro-Am at the start of next month! Let’s go”

Bale’s love for the game of golf is well-known and he is said to have a three-hole golf course at his house. However, his obsession with the sport was rumored to be a key factor concerning his exit at Spanish club Real Madrid which ended in a toxic nature.

Celebrating reaching Euro 2020 alongside his Welsh teammates, the five-time Champions League winner infamously stood behind a banner of the Wales flag with the words “Wales. Golf. Madrid. In that order” written over it. This was slammed by Spanish media describing him as ‘disrespectful’ and led to backlash from thousands of Real Madrid fans who turned against him.

Bale is rumored to have an impressive handicap and reports have suggested that since he has retired, he plans to focus more on his game.

The AT&T Pebble Beach Pro-Am from February 2-5 and will have 156 amateurs participating including Bale.