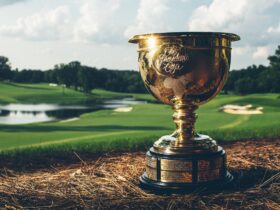 The WGC-HSBC Champions cancellation due to the continuing COVID-19 pandemic came out this week. The TOUR event’ schedule was from Oct. 29 to Nov. 1, but after closely deliberating the decision to cancel it occurred to ensure the safety of staff and players.

The WGC HSBC Champions offered a $10.25 million purse for the winners and the venue was at Sheshan International Golf Club in Shanghai, China.  However, all these preparations received a call off after the TOUR consulted the China Golf Association. This resulted from an announcement earlier made in July and the guidelines cemented by the General Administration of China’s sports. They conclude that they will not hold any international sports event for the rest of 2020, aside from trail preparations for the 2022 Winter Olympic.

The news of the WGC-HSBC Championship cancellation conceded with the 2020 Zozo Championship, which moved its location from Japan to Sherwood Country Club in Thousand Oaks, California. The Zozo Championship schedule starts on Oct. 22-25, which is just a week before the WGC scheduling.

Ty Votaw, the PGA Tour executive vice president in a press release, commented, “We worked extensively with all Tours, international officials, the China Golf Association and other local parties to find a solution to host the WGC-HSBC Champions.” He added, “In line with Chinese government guidelines and being mindful of the logistical implications, we collectively made the difficult decision to cancel the 2020 event.”

Since the unwelcome visit of the virus, the PGA TOUR has had to reschedule some events in which we could see where the TOUR moved events from Korea to Las Vegas and Japan to Los Angeles. Golf fans are wondering why the event in China is not moving to the U.S. like the other events.

The PGA TOUR president added, “The WGC-HSBC Champions has been a catalyst in the growth in interest and participation in our sport throughout China and Asia.”

No.1 in the person of Rory Mcllroy’s will have the opportunity of holding the Old Tom Morris Cup for an additional year.