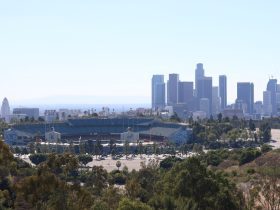 PGA and Elysian Park Ventures Have Formed an Investment Partnership

Jon Rahm repelled rookie Davis Thompson to earn victory at The American Express in California, his second PGA TOUR triumph of the year.

Rahm and Thompson were tied with three holes remaining on the PGA West Stadium Course, but it was the Spaniard who took the front foot making a birdie and two pars, finishing on 27-under 261 to claim his ninth win on the PGA TOUR.

The 28-year-old has achieved four victories in his previous six starts and has climbed to third in the world ranking.

“Had I had the same putting I had yesterday or Friday it probably would’ve been a runaway victory, but can’t ask for everything,” Rahm said.

“You learn in every single situation, and today was definitely a stressful day.

“Got a little lucky that Davis’ putt didn’t go in on 17 and a little fortunate that his ball just got over the green on 18.

“What a heck of a player he is. He’s doing all the right things and wouldn’t be surprised if he wins soon, because he gave me a real battle today and it was a lot of fun. I’m sure there’ll be many to come.”

Rookie Thompson, in his 20th PGA TOUR start, could not keep up with Rahm and expressed his frustration after he pulled his drive wide on the par-five 16th and missed a 48ft putt on the par-three 17th. However, Thompson’s second-place finish is his best career finish so far.

“I usually always leave the stick in from a long distance,” Thompson said of the putt at No. 17.

“I feel like it helps me with my speed. I’ll probably play the what if’ game in my head for a long time, unfortunately.

“I had a great read. I probably hit it too firm. If it had great speed, it would have just hit the flag and dropped. But we’ll never know. I’m proud of myself for this week.”

The next event on the PGA TOUR is the Farmers Insurance Open taking place between January 25–28 at the Torrey Pines Golf Course in California.