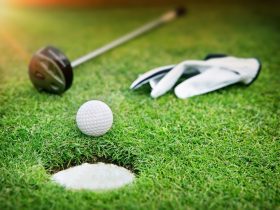 The Open Championship is the longest running major golf tournament, and this year marks the 150th Open. To mark the occasion, we will be taking you through a whistle-stop tour of the history of The Open.

Willie Park Snr. became the inaugural winner of The Open, beating Old Tom Morris by two shots. As a prize for winning The Open, Willie Park Snr was crowned “The Champion Golfer of the Year” and received a red Moroccan leather belt, called the Challenge Belt. A prize fund wasn’t introduced until 1863, where $13 was split between 2nd, 3rd and 4th place. A year later in 1864, the rules were changed, and the winner would also receive a cash payment. These sums of money stand in stark contrast to the $2million received by 2021 Open Champion Collin Morikawa.

Many people associate The Open with the Claret Jug trophy which is handed to the winner each year. However, you might be surprised to learn that the Claret Jug trophy wasn’t actually introduced until 1873 – thirteen years after its first event. A decision was made in 1872 that a trophy, in the form of a silver claret jug, would be provided to the winner. This decision was made too late for the holding of the 1872 Open, and Young Tom Morris the 1872 Open Champion was awarded with a medal instead – although the first year listed on the Claret Jug is the 1872 Open Championship won by Young Tom Morris.

The early years of The Open were dominated by Old Tom Morris, his son Young Tom Morris (both won four championships each) and Harry Vardon (who won a record six titles). There was no 1871 Open Championship, because there was no trophy to award the winner. It is believed that Young Tom Morris earned the right to keep the Challenge Belt by winning the competition three years in a row, and incredibly, organizers didn’t have a plan for this situation, and as such the 1871 Open was canceled.

Englishman, John Ball, became the first non-Scottish player to win The Open in 1890. 1921 saw the first U.S.-based players compete in The Open, when eleven players flew over to Scotland, funded by a specialist subscription from Golf Illustrated readers. Jock Hutchison, an American citizen, who was born in St Andrews, won the 1921 Open Championship in his birth town. Soon after, a period of US dominance began, with U.S.-based or born players winning every Open Championship from 1924 to 1933, including Bobby Jones in 1926 & 1927.

Legendary American golfer, Ben Hogan, won on his one and only Open Championship appearance in 1953. This secured Hogan the ‘Triple Crown’ as he had won the Masters and U.S. Open earlier in the year. Peter Thomson became the first Australian winner in 1954, later winning 5 Open Championships. The number of US entrants at this time dropped, as the US PGA became much more lucrative. Also at the same time, what seems incredible now, the US PGA used bigger golf balls than in The Open, meaning that U.S.-based players would have to adapt quickly for a one-off golf tournament.

Arnold Palmer first competed in The Open in 1960, where he sought to emulate Ben Hogan by winning three majors in a single year. He later returned to win the Open in 1961 and 1962, and encouraged many other US players to join him. Palmer was an incredibly popular and influential individual and his Open victories are thought to have reignited an interest in The Open from US players and public.

Jack Nicklaus won his first Open Championship in 1966, and with it he completed his first career Grand Slam. He holds an incredible record of seven second place finishes at The Open. This included one of the most famous Open Championships where in 1977, the often referred to ‘Duel in the Sun’ took place. In this duel, Tom Watson and Jack Nicklaus played some of the highest quality golf seen at the time, directly against each other in the final round.

Seve Ballesteros showed his Spanish flair and unique short game and recovery skills at The Open, winning in 1979, 1984 and 1988. The first of his wins seemed to break an American stranglehold on the competition. The image of Ballesteros pumping his fist as he holed the winning putt at St Andrews in 1984 is known throughout the world, and Ballesteros even had an image of it tattooed on his forearm. Paul Lawrie won the 1999 Open, which is probably better known for the capitulation of Frenchman Jean van de Velde, who had a three-shot lead playing the last hole of the tournament. Van de Velde’s third shot on the 18th ended up in a water hazard, where he considered playing it, removing his shoes and socks and rolling up his trousers. He eventually lost out in a playoff.

Whilst winning three Open Championships, Tiger Woods had mixed fortunes at the Open. He won comfortably at St Andrews in 2000, setting a record score 19-under par, and also won in 2005 & 2006. However, in 2002 after winning seven of the previous 11 major championships, Tiger could only muster a score of 81 (10 over par) in the third round, as heavy rain and strong winds blew his bid for a Grand Slam off course.

The 2020 Open was canceled due to the Coronavirus (COVID-19) pandemic. As a result organizers pushed the scheduling back a year to make sure that the 150th Open Championship would be held at the spiritual home of golf, St Andrews. Collin Morikawa won by two strokes in 2021 – what will the 2022 Open have in store?