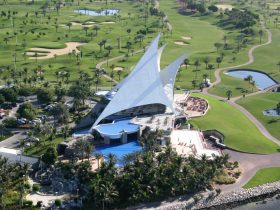 You have to crawl before you can walk. Even the pro golfers you see in the headlines today were once novices and amateurs, but they kept putting their best forward until they made it to the top of the world. Before you can fight it out with the big names in the major tours like the PGA, LPGA, and DP World Tour, you need to prove your worth in the amateur leagues, and there is the World Amateur Golf Ranking statistics to show just how well you are faring. Below we look at the top 10 male and female amateur golfers that you should watch for in 2023.

Swedish amateur golfer Ludvig Aberg has been rising meteorically since starting in his local Eslöv Golf Club in 2007. The star has represented his country on different levels as an amateur since 2017, with notable wins, including the 2019 European Amateur Team Championship. In September 2022, Aberg became number one in the WAGR and now eyes the world stage.

2022 US Amateur winner Sam Bennett is one of the most promising golf prospects. Ranked number two in the WAGR men’s category at the end of 2022, Sam has proven his undying passion and determination for golf. As he completes his final year of college golf at Texas A&M, all signs indicate a promising pro career in the making.

As a Vanderbilt freshman, promising amateur golfer Gordon Sargent joined the likes of Phil Mickelson and Ben Crenshaw as one of the few elite players that have won the NCAA Championship as a freshman. Gordon ranks third in the WAGR men’s category at the end of 2022, and with his zeal, he could make it to the big leagues even before he nears his final year.

Ohio-born US amateur golfer Michael Thorbjornsen has been performing magically on the course, notably winning the 2018 U.S. Junior Amateur at Baltusrol Golf Club, which saw him automatically qualify for the US Open. In 2022, the star finished 4th in the Travelers Championship at the TPC River Highlands and only missed the prize money since he competed as an amateur. That’s a sign that Michael should go pro and play in the big league.

Austin Greaser is one of the young talents causing massive ripples in golf. In 2022, the amateur golfer defeated Mateo Fernandez de Oliveira to win the 120th Western Amateur and ended the year ranked fifth in the WAGR men’s category.