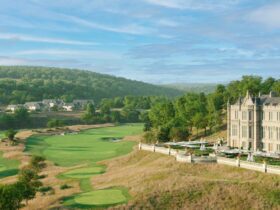 Any time Patrick Reed visits a golf course he strives to leave the place better than before he arrived. Reed’s attitude is an example of what the PGA TOUR does week in and week out at tournaments around the world. The PGA TOUR charitable donations surpass $3 billion in all time donations.

“The biggest thing is it shows how much the TOUR gets involved—it’s not just about golf and on the golf course,” said Reed, an eight-time PGA TOUR winner including the 2018 Masters. “To see the TOUR as well as its players, including myself with the Team Reed Foundation and a lot of the other guys, getting more involved not just with our golf game but trying to give back to communities and help out is massive. I think it’s something a lot of athletes do very well and it’s something I feel the PGA TOUR is doing the best.”

Also Read: The Life and Legacy of Billy Payne

A history of charitable donations

Every TOUR tournament provides a platform for individuals to give back to the local community in three ways: attending an event, donating money or volunteering. These not-for-profit events under the TOUR umbrella donate net proceeds to support local organizations. These charitable donations positively impact more than 3,000 nonprofits annually, including First Tee, Fore!Kids Foundation, Feeding Northeast Florida and Make-A-Wish.

First Tee is a youth development organization that introduces golf and its values to young people.  With after-school and in-school programs in all 50 states, First Tee impacts more than 3.5 million children each year.

“The PGA TOUR has played an integral role in First Tee’s success since the beginning with former Commissioner Tim Finchem, who engaged the entire industry to support First Tee’s launch in 1997,” First Tee CEO Greg McLaughlin said. “His passion for the organization, which remains as strong today as it was in 1997, is a significant part of the organization’s success. Supporting First Tee is part of the fabric of the PGA TOUR’s business model, which further extends their commitment to giving back and impacting communities.”

The PGA TOUR charitable donations history has not only benefited various charities, but is also inspiring golfers to give back in their own way as well.

“Giving back is what the PGA TOUR was kind of founded on,” Griffin said. “When these companies and the TOUR raise money for charities and organizations, it motivates me and other players who want to do the same. I started a foundation to do the same thing in my hometown. I think it’s a win-win for everybody.”

Despite play being suspended from March 12 until June 11 as a result of the coronavirus pandemic, that didn’t stop the PGA TOUR and its athletes from continuing their charitable efforts. The TaylorMade Driving Relief skins match that pitted Rory McIlroy and Dustin Johnson against Rickie Fowler and Matthew Wolff raised more than $5.5 million for COVID-19 relief. Tiger Woods, Phil Mickelson, Peyton Manning and Tom Brady raised $20 million for relief efforts during Capital One’s The Match: Champions for Charity.

The TOUR, which restarted play with the Charles Schwab Challenge on June 11, doesn’t appear to be slowing down its charitable contributions anytime soon.