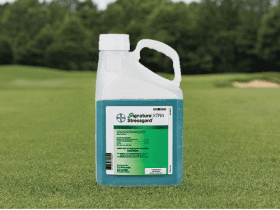 See the Science Behind Extraordinary Turf

Suzann Pettersen, this year’s Solheim cup winner, went out on a high when she sunk the winning putt at Gleneagles and then announced her retirement from golf shortly afterwards.

Pettersen penned an open letter, one full of emotion, to her son that explained her spur of the moment decision to leave the sport.

“It took a minute for me to find you and your dad in the melee,” she wrote to her son, of her win at Solheim. “But when I did, when I looked at you in your father’s arms, I said, ‘This is it. Nothing is ever going to top this.’ I’d had it all…I’m thrilled you were there. Even though you won’t remember it, having you present is something I will cherish forever. Combining the responsibilities of being a mom and a golfer … it was all I needed.”

Who is Suzann Pettersen?

Long before her win at Gleneagles this year, Pettersen has been a world class golf player. She turned pro in September 2000 and has been in the world top 10 for a consecutive eight years. She has played some amazing golf during her career and has a stellar record.

However, there have been moments that she may rather forget. At, the Solheim Cup in 2015, Pettersen caused other pros to breakdown in tears when she refused to accept the assumption that Europe had conceded the 17th hole. Her refusal led to the referee finding in Europe’s favour but this moment called her sportsmanship into question. She later made a public apology for the way she had behaved and said she understood that she had let her competitiveness get in the way of the ‘bigger picture’.

Pettersen has more wins under her belt than most. This list is just a selection of her wins, taken from the LGPA Tours she has taken part in:

Pettersen is the daughter of Mona and Axel Pettersen who both have an athletic background. Her father is a champion skier in Norway and her mom a gymnast. Her parents were heavily influential in her taking up golf after refusing to let her become a horse rider. Pettersen stated in the past that when took up golf for the first time, she immediately knew it was the sport she had always been looking for. This belief led her to become a Norwegian Amateur Champion and she represented Europe in the Junior Ryder Cup back in 1997 and 1999.

Pettersen married Christian Ringvold in 2017 in Norway. The couple got engaged in 2015 and have been together for many years.

In August 2018 Pettersen and Ringvold welcomed baby Herman into their fold. During her pregnancy, Pettersen faced some medical complications, which led her to take a break from golf. She recalls the time as a “relief”. She mentioned this break in her open letter, writing that, “I was very comfortable. For the first time, my brain switched to normal.”

She is well known for her easy going nature and ability to laugh at herself, she sometimes can appear to be shy of the attention and lives a contented life with her husband and son. It’s clear that behind the smile there is an incredibly driven woman, and her successes in golf only go to prove this.