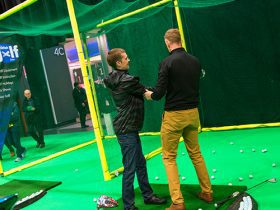 Almost seven million TV viewers sat back and watched in awe as Philip Alfred Mickelson won the PGA Championship less than a month before his 51st birthday. Mickelson’s victory at Kiawah Island was arguably the most momentous of his illustrious career. He managed to push aside the troublesome issues that have haunted him for many years to become the oldest man ever to win a major on one of the most demanding courses the world of golf has to offer.

After getting his hands on the sixth Major championship of an illustrious playing career, Mickelson said in his news conference, “It’s been an incredible day, and I’ve not let myself kind of think about the results until now, now that it’s over,”

Phil Mickelson tied with golfing greats Nick Faldo and arguably the greatest ball-striker the game has ever been lucky enough to see, Lee Trevino, and is now only one Major behind legends Harry Vardon, Sam Snead, Gene Sarazen and of course Arnold Palmer, who all sit with seven Majors. Who would bet against him joining that elite group after the way he played last week?

Phil Mickelson turned back the clock on Sunday, five years on from the last time he contended at a Major on a Sunday, never mind winning one. Phil’s idol, the late, great Seve Ballesteros, would himself have been proud of the great wedge and iron play that saw him navigate his way to triumph, bailing himself out of trouble time and time again on one of the most booby-trapped courses on the tour.

The joy wasn’t only clear to see on the face of ‘Leftie’; it was written all over the faces of the bulk of the crowd he fought his way through to get to the 18th green to secure his two-shot victory. For decades now, Mickelson’s connection with the fans has been comparable in the sporting world only to Roger Federer’s.

The dignity and class Phil Mickelson has shown throughout his career, in both victory and defeat have always endeared him to the golfing public, and the fans who cried with him in 2010 when he won the Masters for his cancer-stricken bride are the same fans who celebrated with him on Sunday.

It’s not only the fans who have a great bond and affiliation with Phil. Fellow pros were also delighted for him. He is one of the most popular players on tour.

Paul Casey finished his round over an hour before Mickelson sunk his final putt, but stuck around the 18th to see his friend become the first player in a decade to win a Major from outside of the world’s top 50 since Keegan Bradley won the same tournament in 2011. Casey simply said. “This is cool shit.” with a smile on his face.

Only a trio of players had previously won tour events over four separate decades: Sam Snead, Raymond Floyd and Davis Love III, the previous three to achieve the incredible feat. This victory also tied Phil eighth with Walter Hagen for most wins in PGA Tour history on 45.

Phil Mickelson hit a dry spell after winning the British Open in 2013, not winning another tournament until outsmarting Justin Thomas to finally get back on track at the WGC-Mexico Championship before saying, “This is a very meaningful win, I can’t put it into words given the tough times over the last four years and the struggle to get back here.”

Later that year, there was an infamous showdown between Phil Mickelson and his long term rival and now good friend Tiger Woods, Mickelson winning after sinking a dramatic birdie on the 22nd and final hole.

The pair squared off again 12 months ago in the ‘Champions for Charity’ match, which raised $20million for coronavirus relief efforts: this time with Tiger coming out on top.

Rolling Back the Years

Two weeks before this unexpected sixth Major, the then 115th ranked golfer in the world had a rollercoaster week at the Wells Fargo Championship. Mickelson went into freefall shooting rounds of 75, 76 and 76 to finish 69th after shooting a seven-under 64 at Quail Hollow to take the outright lead after day one. It was the 18th tournament in a row Phil failed to finish in the top 20.

What followed that collapse, though, is what has transpired to be a very prophetic tweet.

“I’ve failed many times in my life and career, and because of this, I’ve learned a lot. Instead of feeling defeated countless times, I’ve used it as fuel to drive me to work harder. So today, join me in accepting our failures. Let’s use them to motivate us to work even harder.”

Golf is, of course, a sport where you fail far more often than you succeed, but the harder the climb, the better the view, and Phil the Prophet will savour this win like no win he has had before.

SEE ALSO: Talking About the Cost of Golf – Do You Need to be Rich to Play?